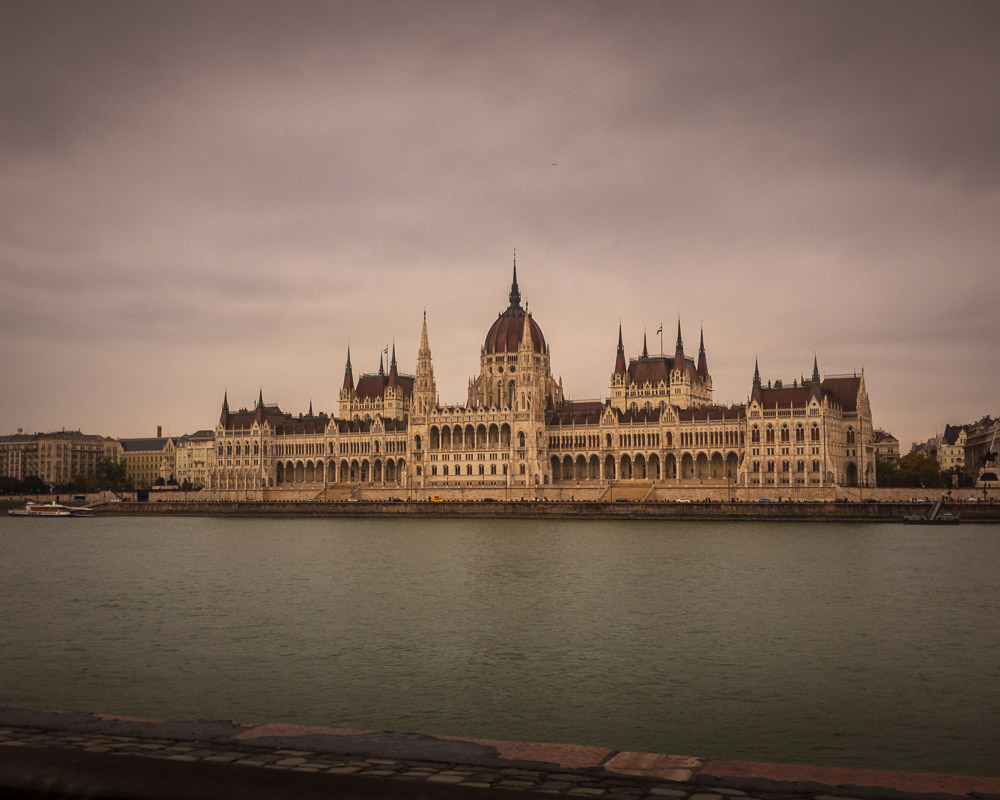 he best laid plans of mice and men...we wake much too late. So much for our plans of an early expedition in the city before the city wakes. This also means that we may be leaving Budapest later than we wanted. We dress and pack and head down to breakfast. Apparently we were not the only ones with the idea to eat - the breakfast was full of raucous tourists and children. We finally find a free table but it is not easy to navigate the buffet and my frustration is mounting. I grab some meat and cheese while Olaf battles the coffee machine for some caffeine. We eat quickly (the environment is not conducive to a leisurely breakfast) and choose to grab a second coffee at the machine in the lobby to get out of the noise and bustle. We store our luggage in the car and make our way to the Metro station for a last look around the inner city in the daylight. We have been told by Olaf’s friend in Austria that we need to have coffee by the Parliament. That there are many very old coffee shops by the Parliament and we should sit and enjoy a coffee. As the Parliament is at one end of the old city, we decide this is our first stop and that we will make our way back towards the center.

We retrace our steps from the previous evening – Metro 4 to Metro 3. We hop off the M4 at Kálvin tér…where we encounter our first problem. The effortless switch to the M3 from last night is now impossible. I think because there is some construction – maybe – the closure is not well signed. And whatever signage is present is in Hungarian. We also know that we can take to trams so we climb up to the street and see the 49. We hop on knowing that is supposed to bring us into the city – if only it were going in the right direction. Realizing our error, we get off at the next stop. With this error, we are rewarded with a view of the Liberty Bridge.

The Szabadság híd, or Liberty Bridge, was initially built as part of the Millennium World Exhibition between 1894 and 1896. The bridge features Art Nouveau design, the top of the four masts are decorated with large bronze statues of the Turul (a falcon-like bird prominent in ancient Hungarian mythology) and the country’s coat of arms adorned on its side. The bridge was the first in the city to be rebuilt after suffering heavy damage during World War II but it had been repaired with concrete and painted brown. Apparently, the prewar photos of the bridge were not in color and the exact shade of green was not known. Eventually, the color was located in the archives and the molds were located so that a restoration project was completed, and the bridge restored to former glory. 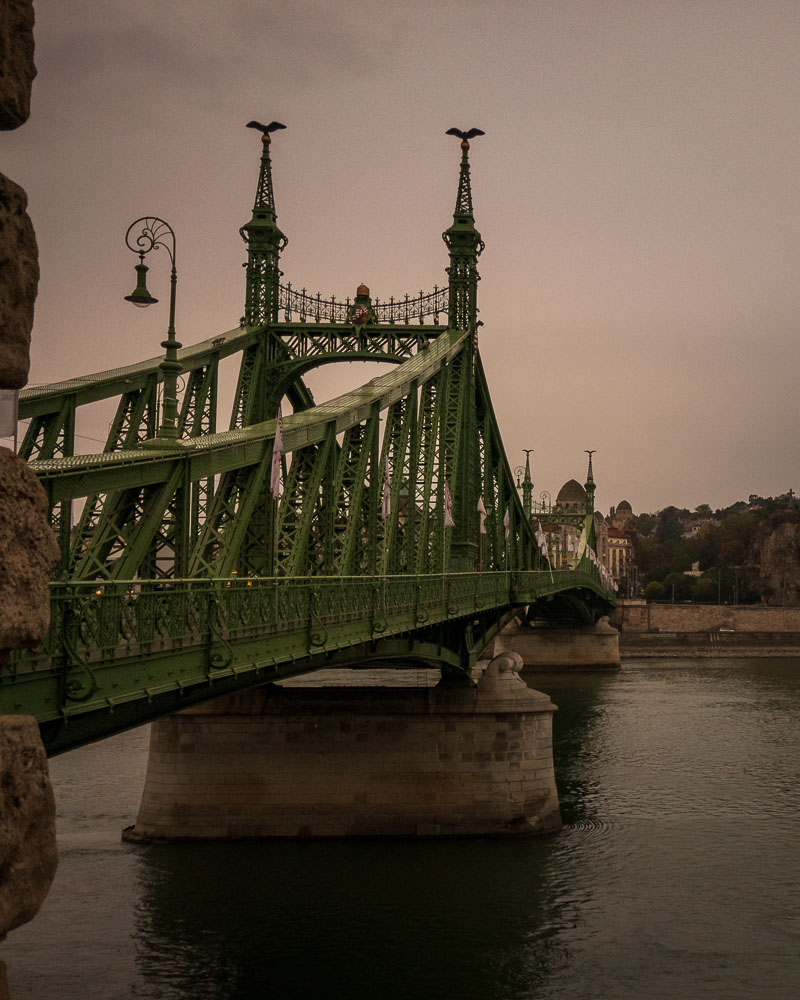 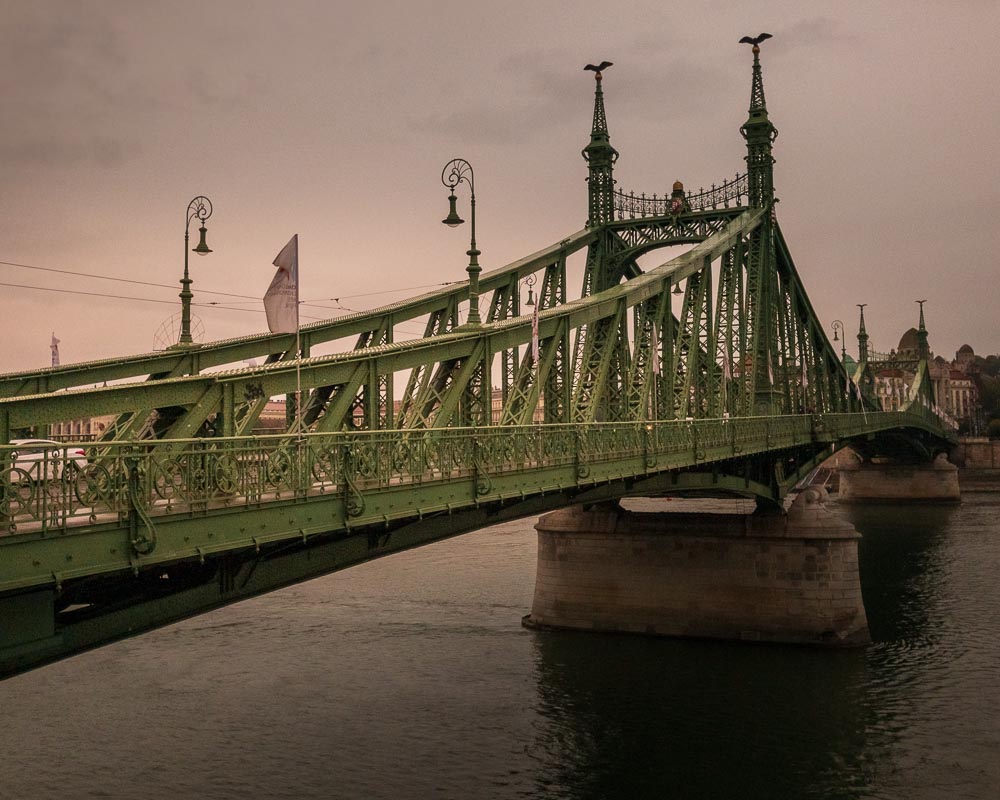 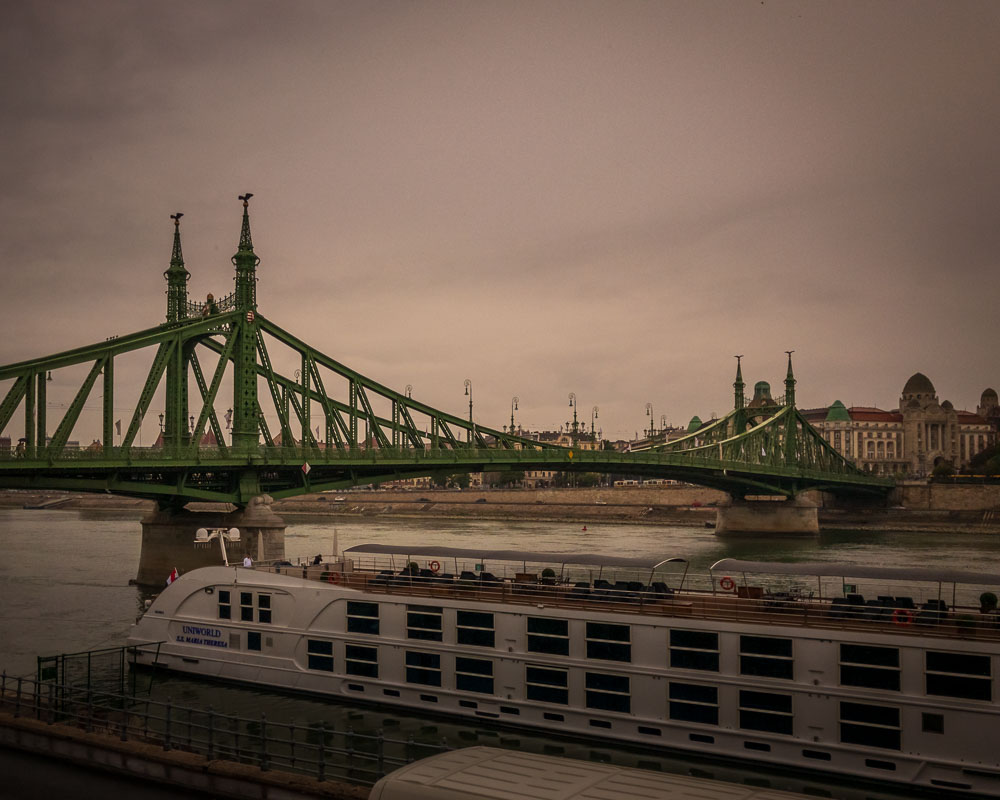 Olaf suggests that we walk to the Parliament rather than taking the tram that seems to run the length of the Danube. that way we can take in some of the sights and get a little of exercise. He also suggest we move in one block so that we are not walking along the river and we can soak in the city. I find the juxtaposition between the renovated and the dilapidated houses curious. Some are in great shape and others have been left to fall into disrepair. One of Olaf’s favorite things to do is to enter open building to see the inside architecture. 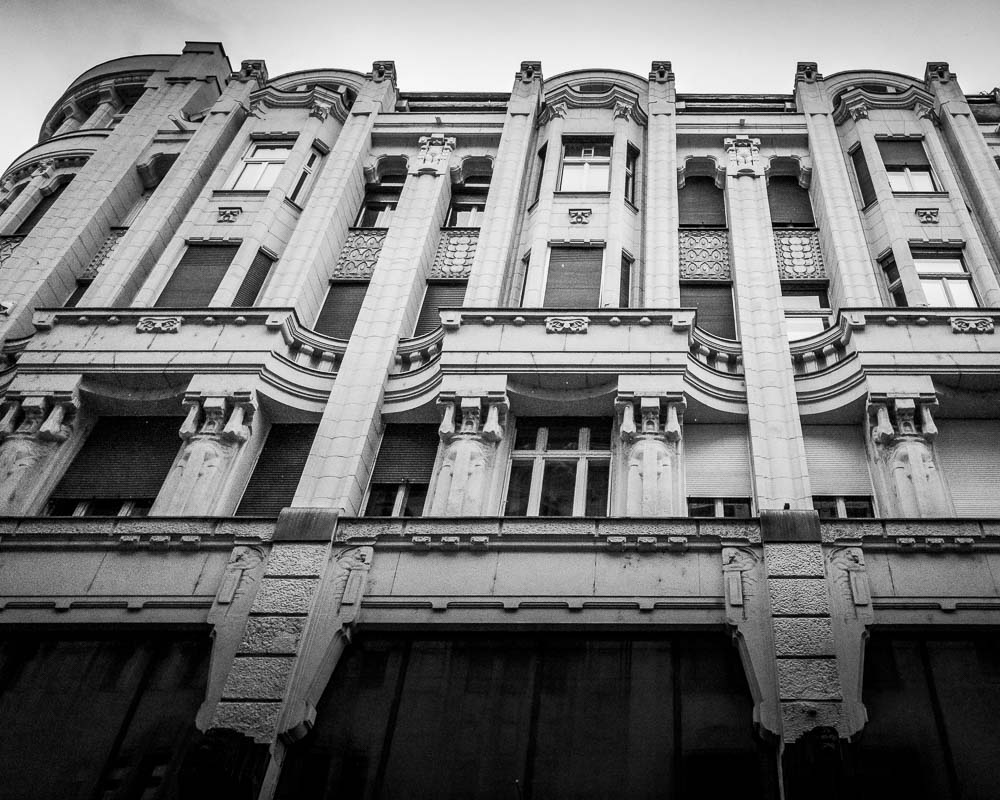 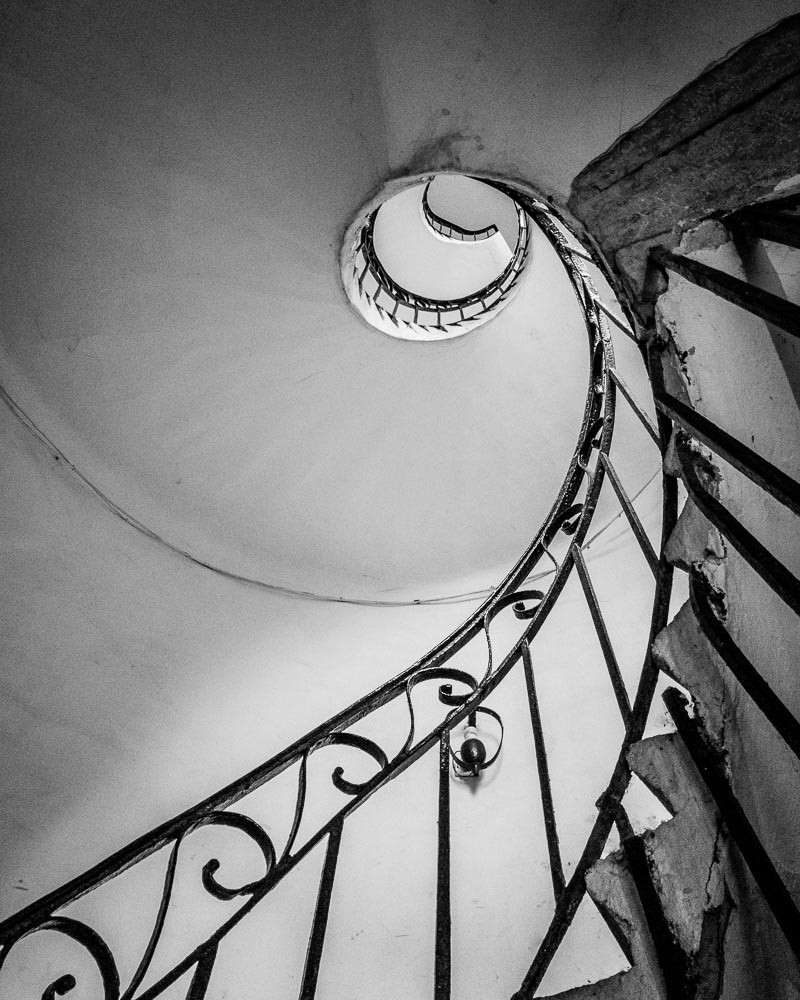 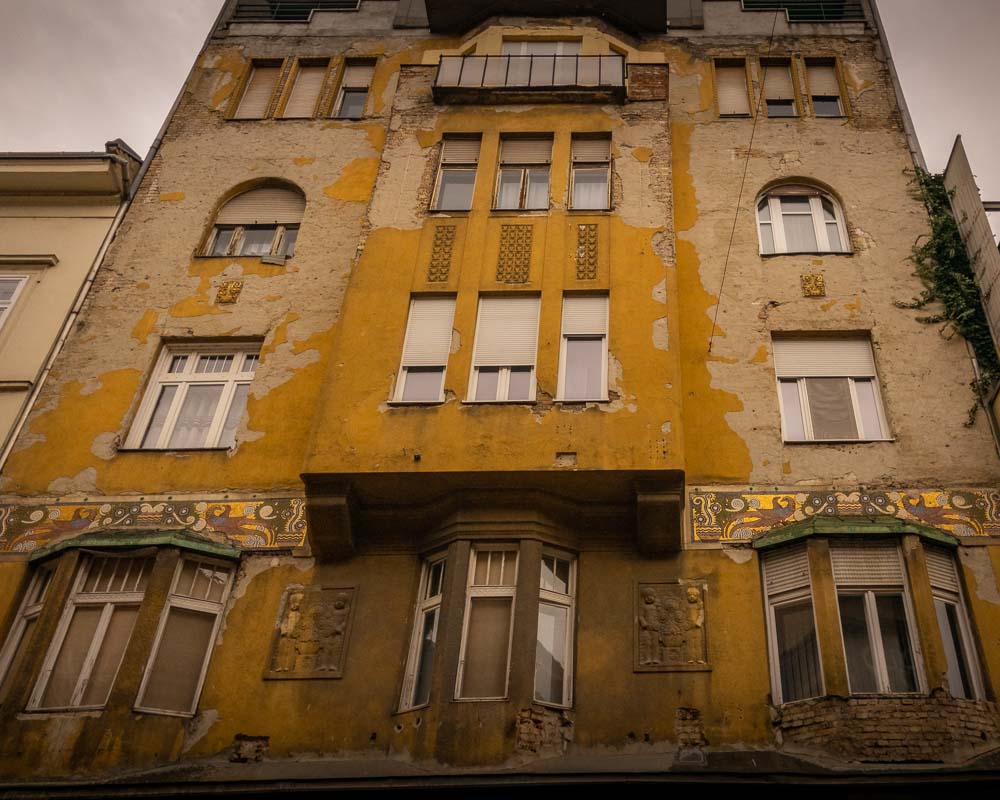 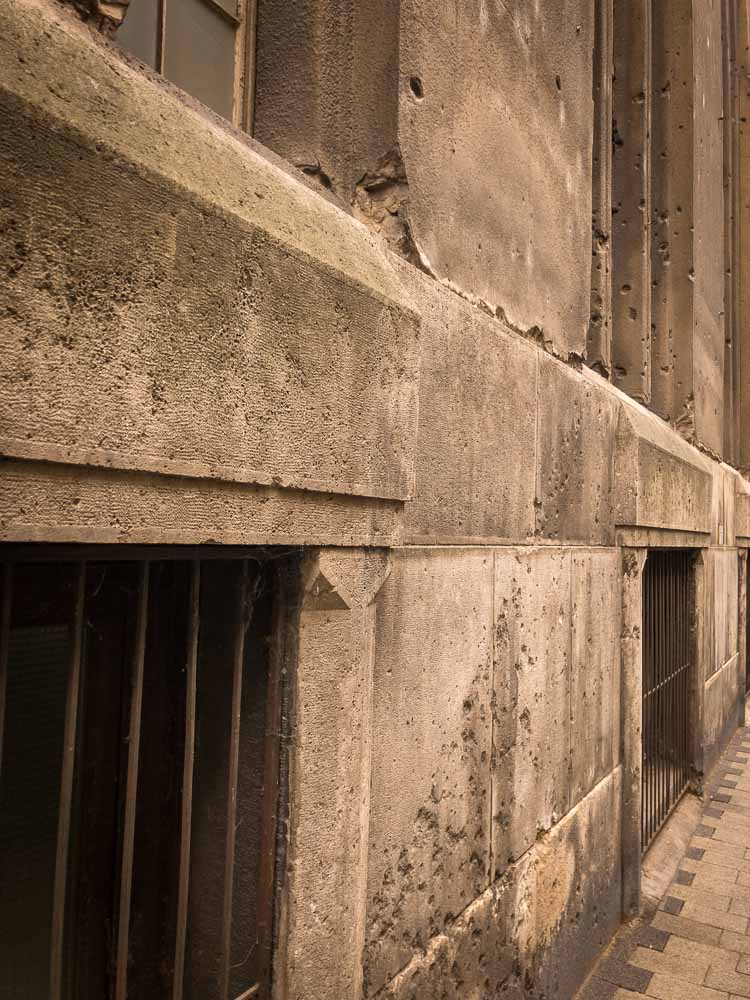 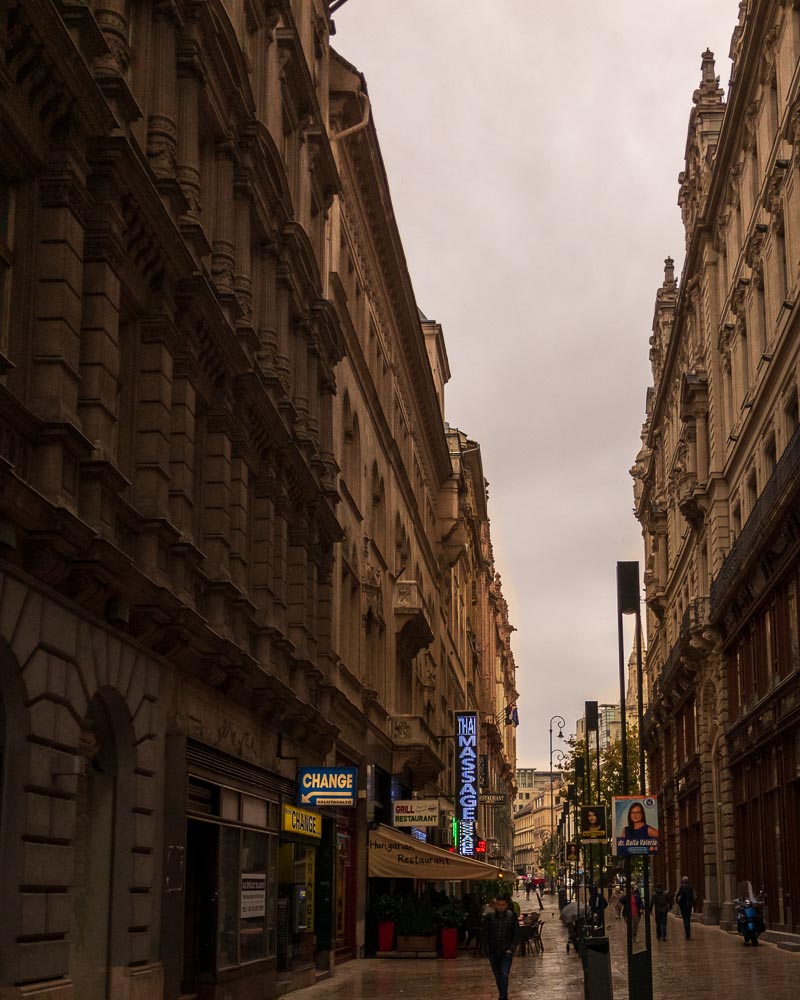 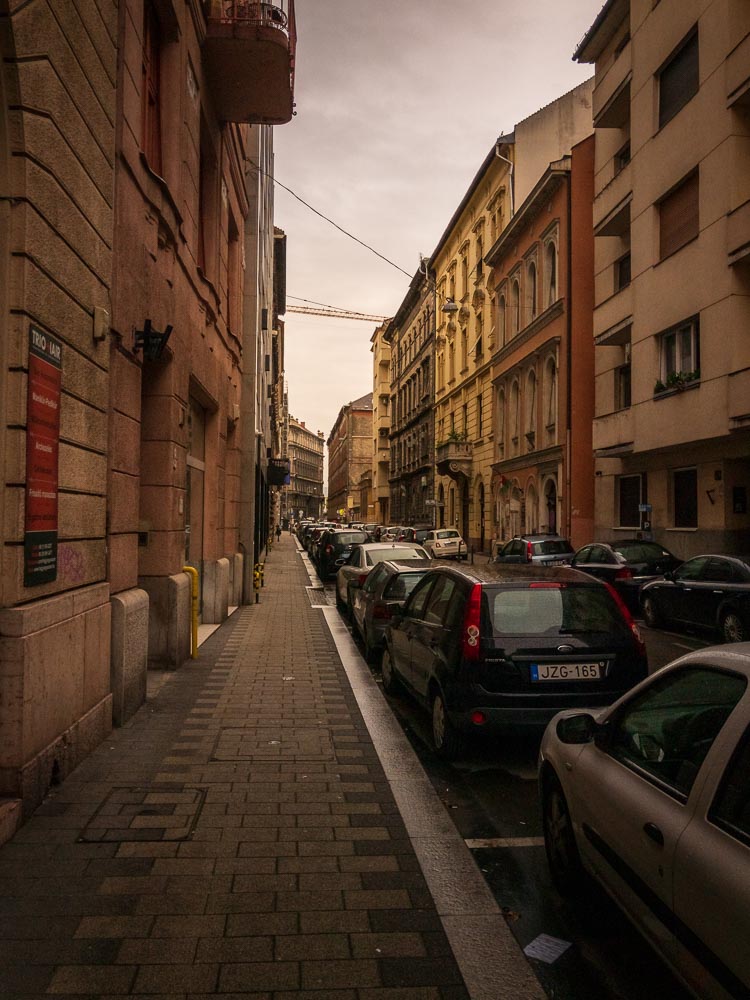 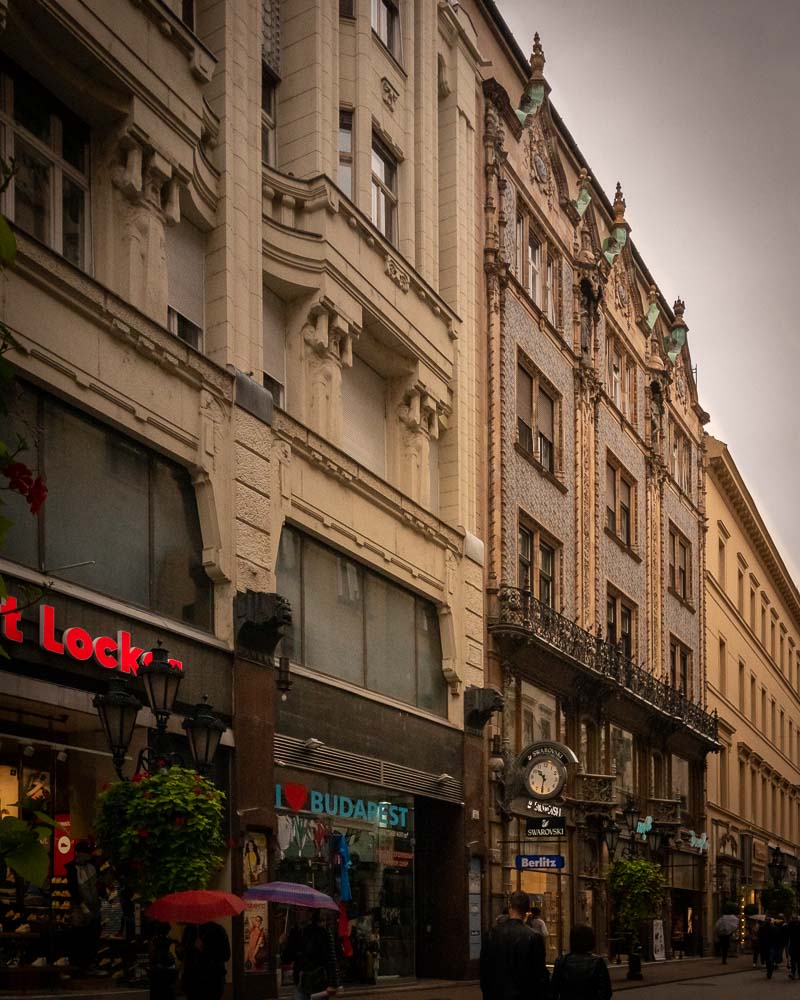 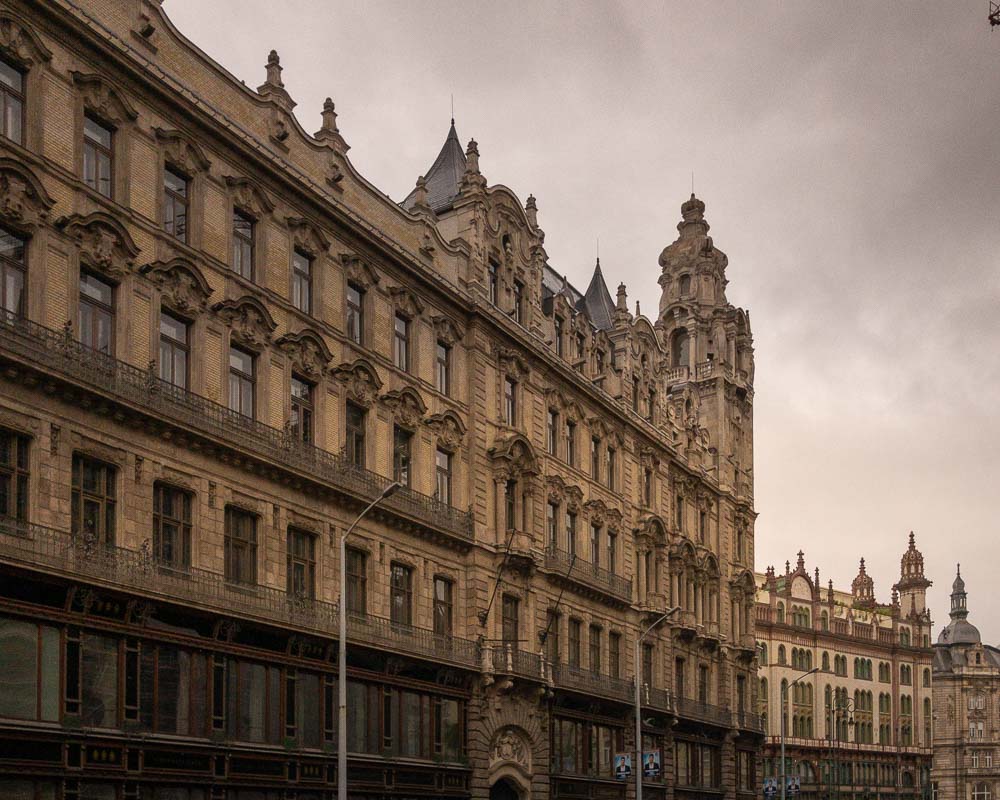 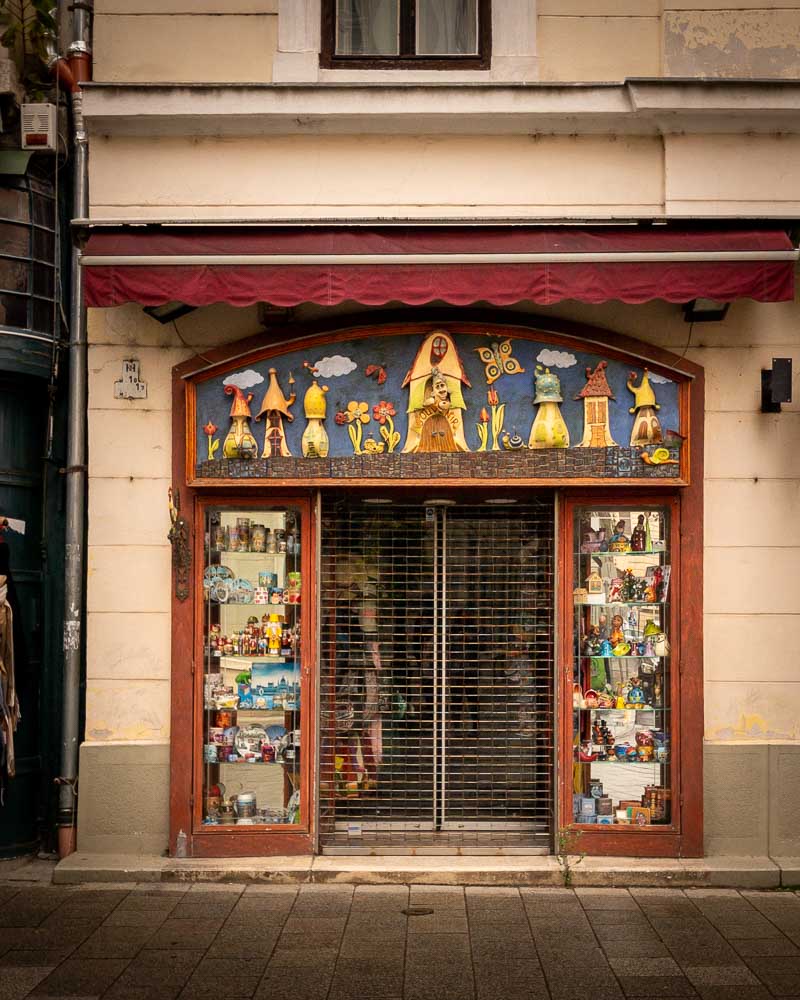 Eventually, after walking for what seems like an inordinate amount of time, we look at the map and see we are still not close to the Parliament building. Knowing that our time is running short in Budapest, we opt to take a tram. Back to the river to take the 2 tram that we eschewed earlier. Eventually, we reach the Parlament but it is much later than we have planned. As we look around for the promised “old” cafes, we are not finding any – and frustration is setting in. We abandon the search for these mythical coffee houses and walk to the next sight – the Art Deco Building.

There are several bridges in Budapest and the Parliament is near the “tower bridge” as Olaf calls it. It is a rather traditional appearing bridge (on the map) and we are always checking any bridge we pass to the picture. This “tower bridge” is actually the Chain Bridge.

The Széchenyi Chain Bridge, is a chain bridge that was opened in 1849 after the Hungarian Revolution of 1848, becoming the first permanent bridge in the Hungarian capital. At the time, it was one of the largest in the world. The lions at each of the abutments were installed in 1852 and are similar in design to the bronze lions of Trafalgar Square. The bridge’s cast-iron structure was updated and strengthened in 1914. In World War II, the bridge was blown up by the retreating Germans with only the towers remaining. It was rebuilt, and reopened in 1949. 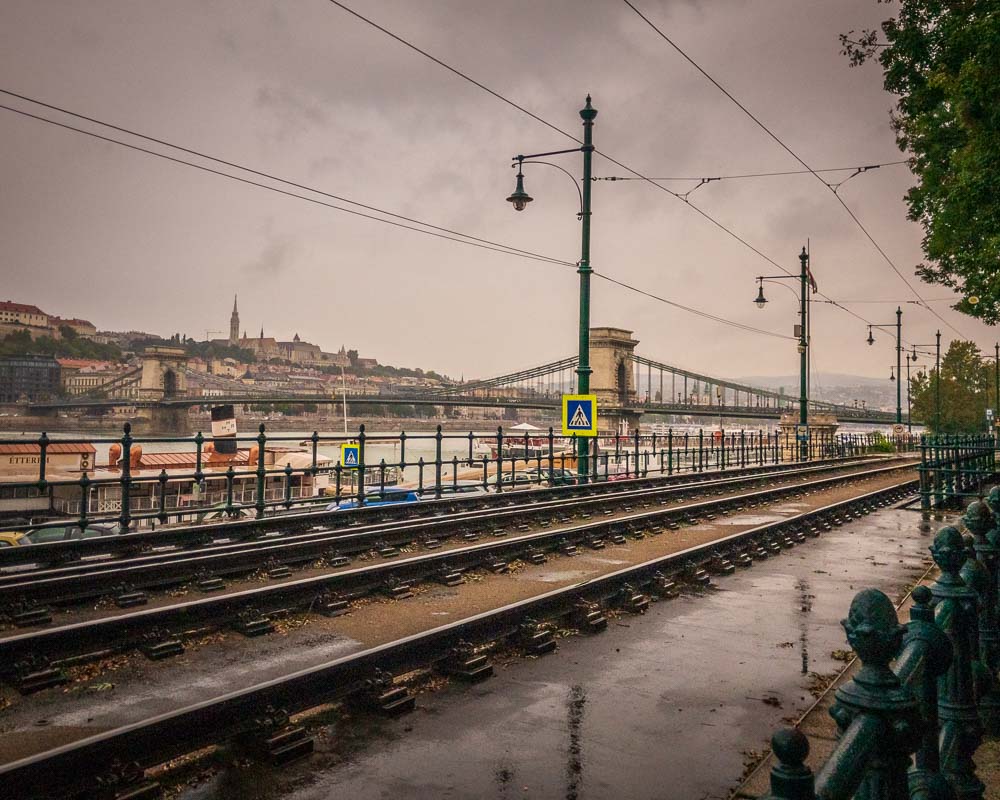 The Art Deco Building is beautiful – and houses a coffee shop – what luck! We enter and sit in a beautifully decorated coffee shop in the Art Nouveau and Art Deco styles. The coffee was good and we had a panini for lunch. 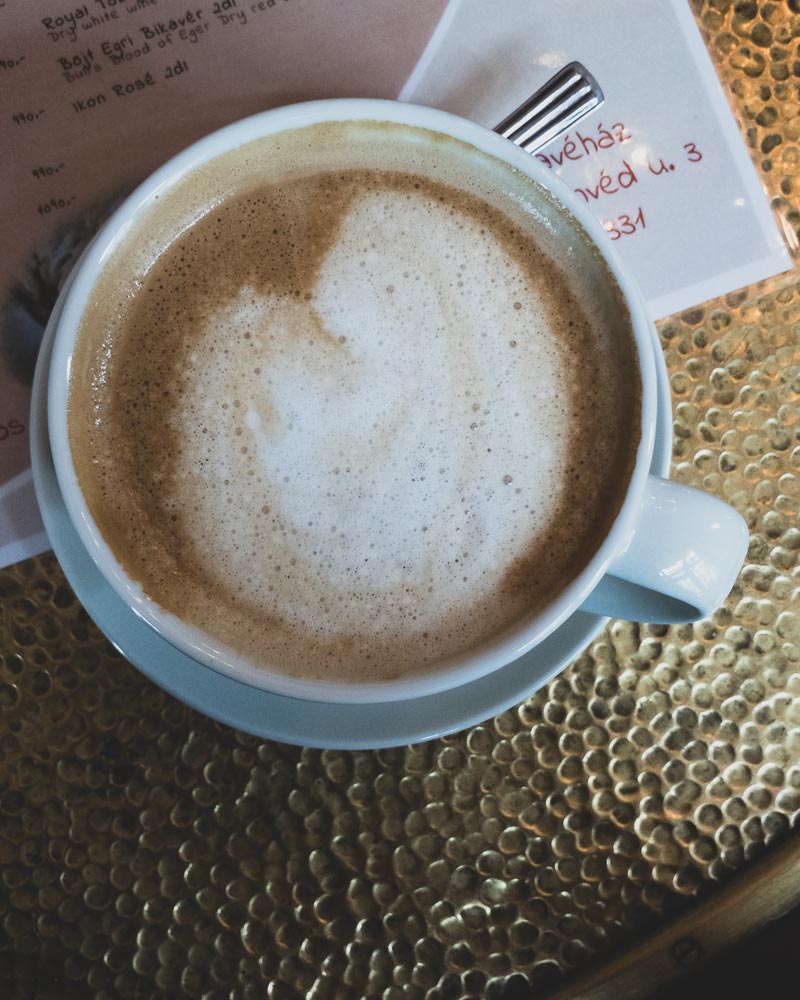 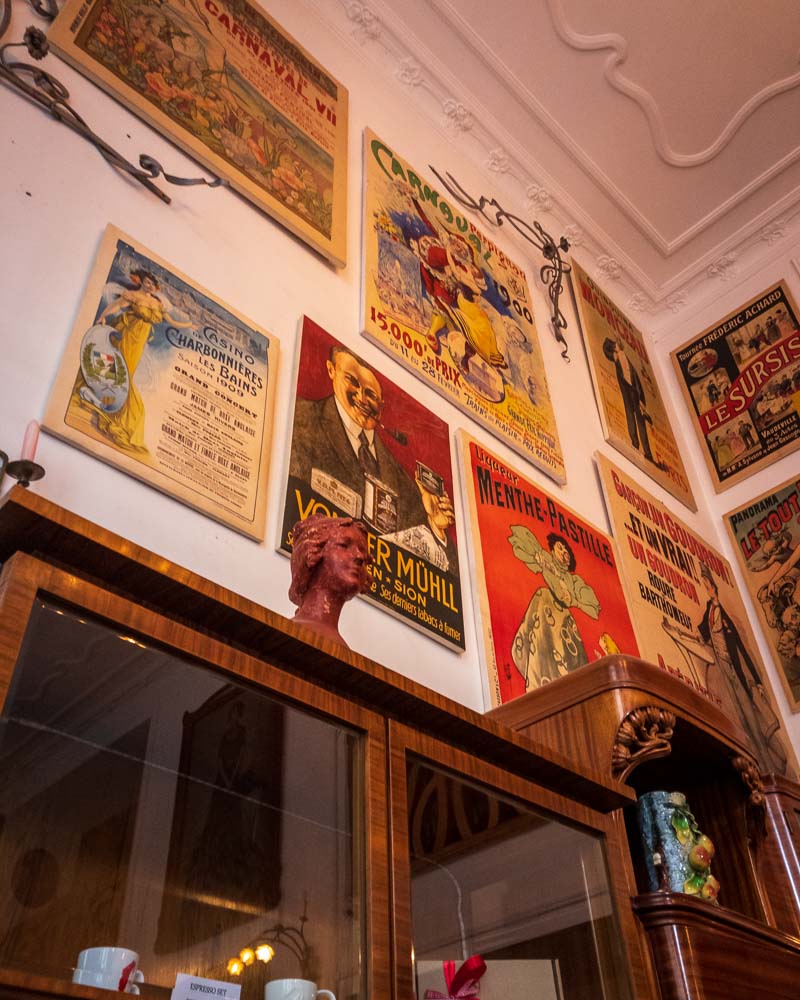 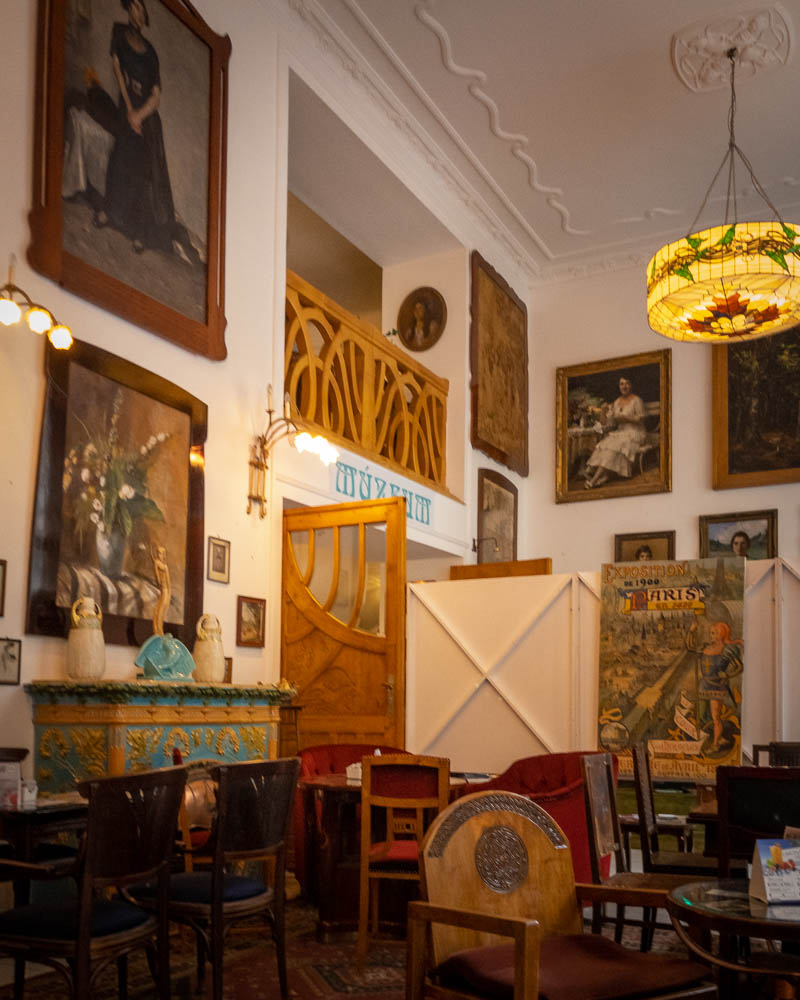 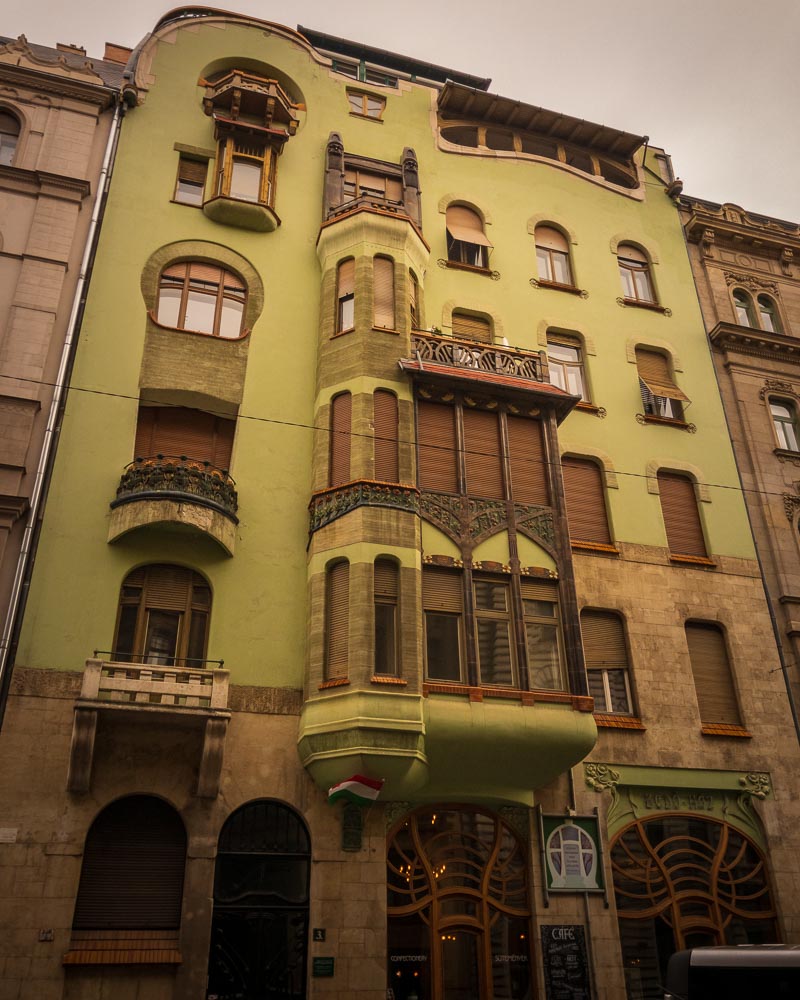 After lunch, we walk back through the center to catch what we may have missed in our search for the Parliament building. The architecture is beautiful and we are enjoying the majesty. 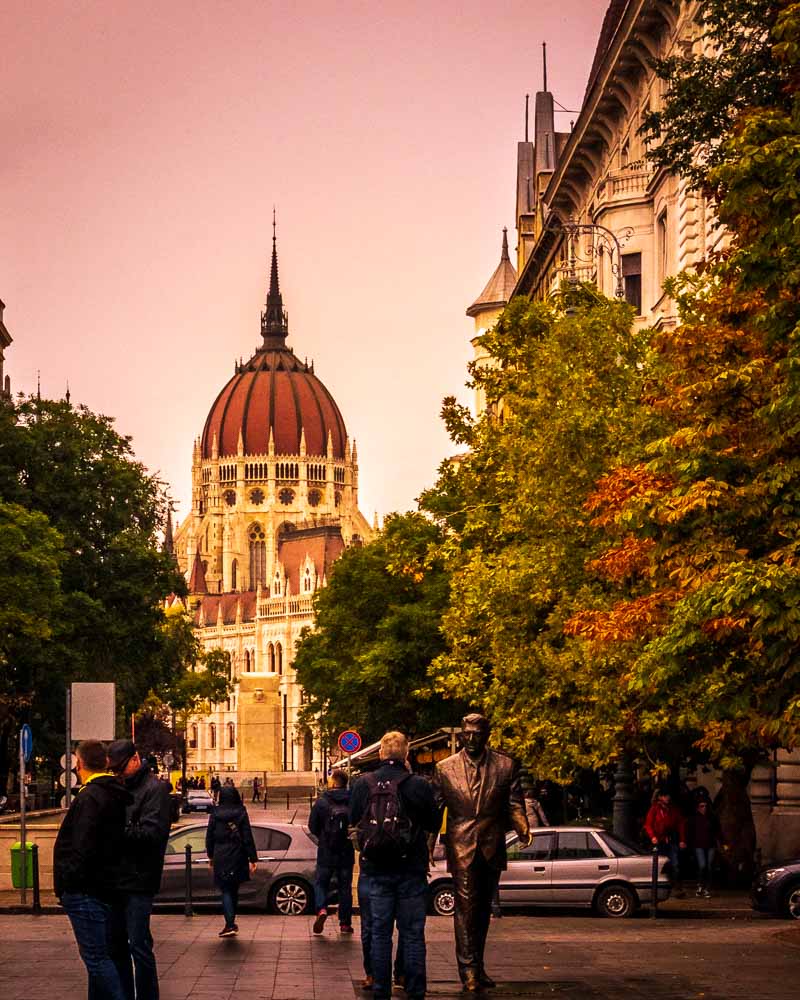 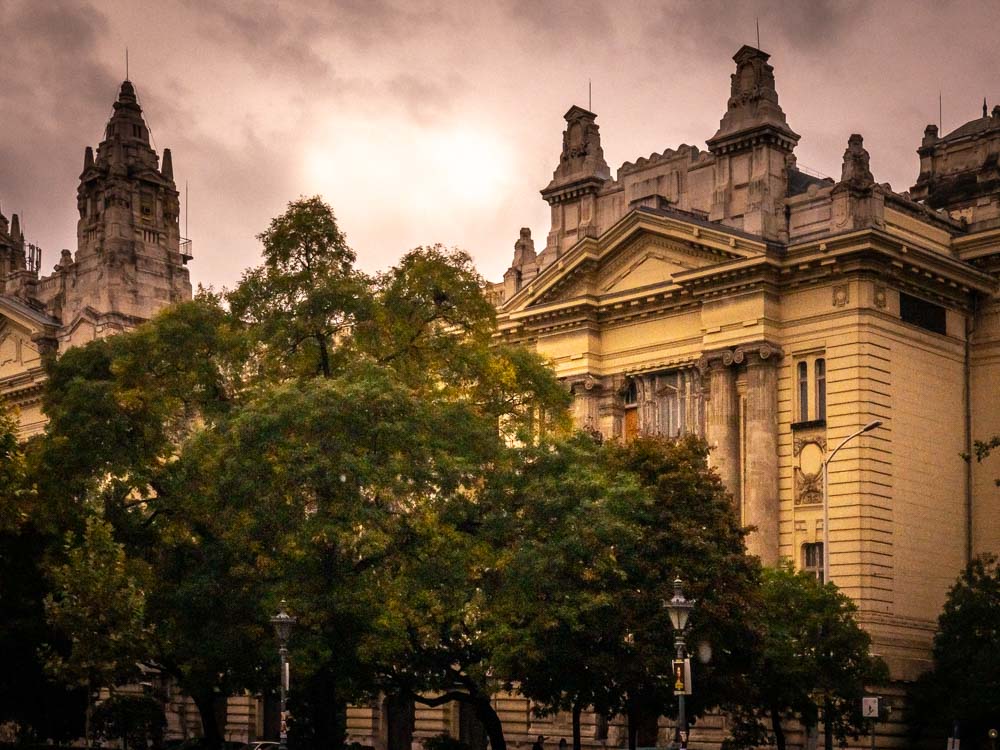 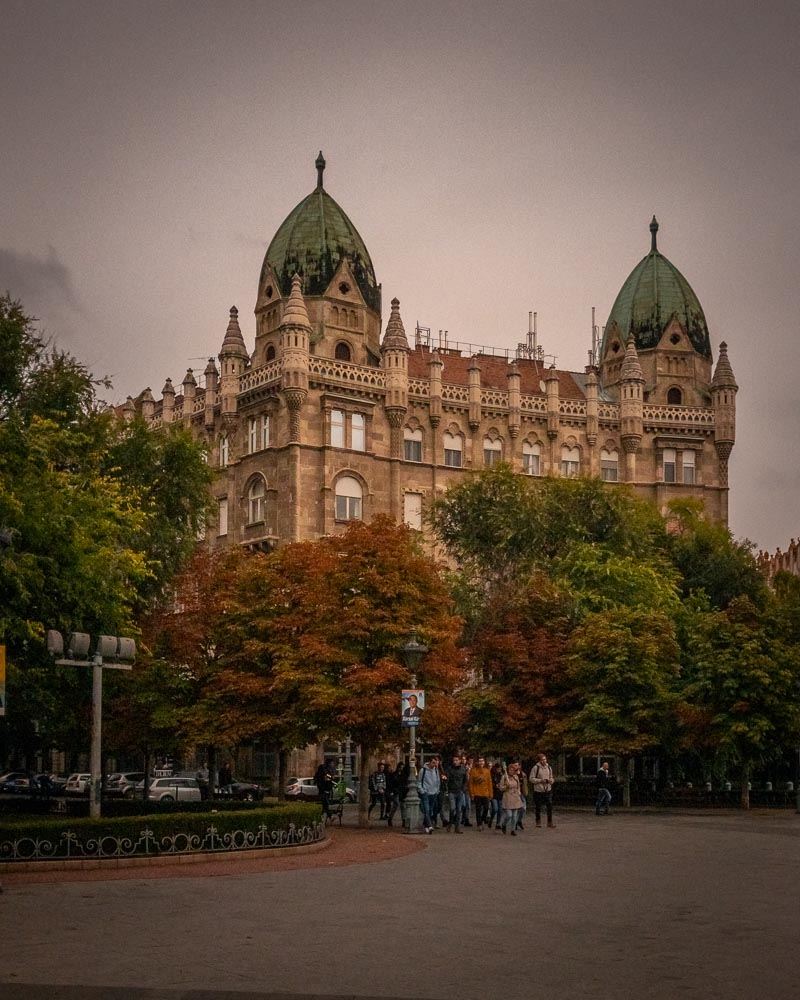 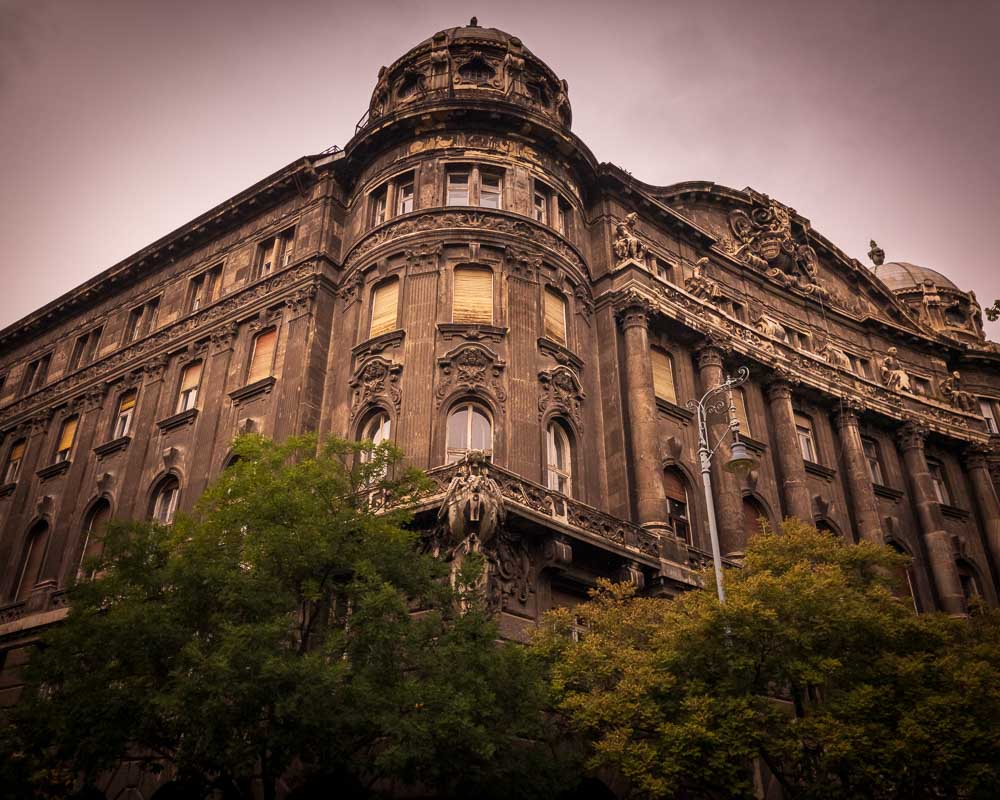 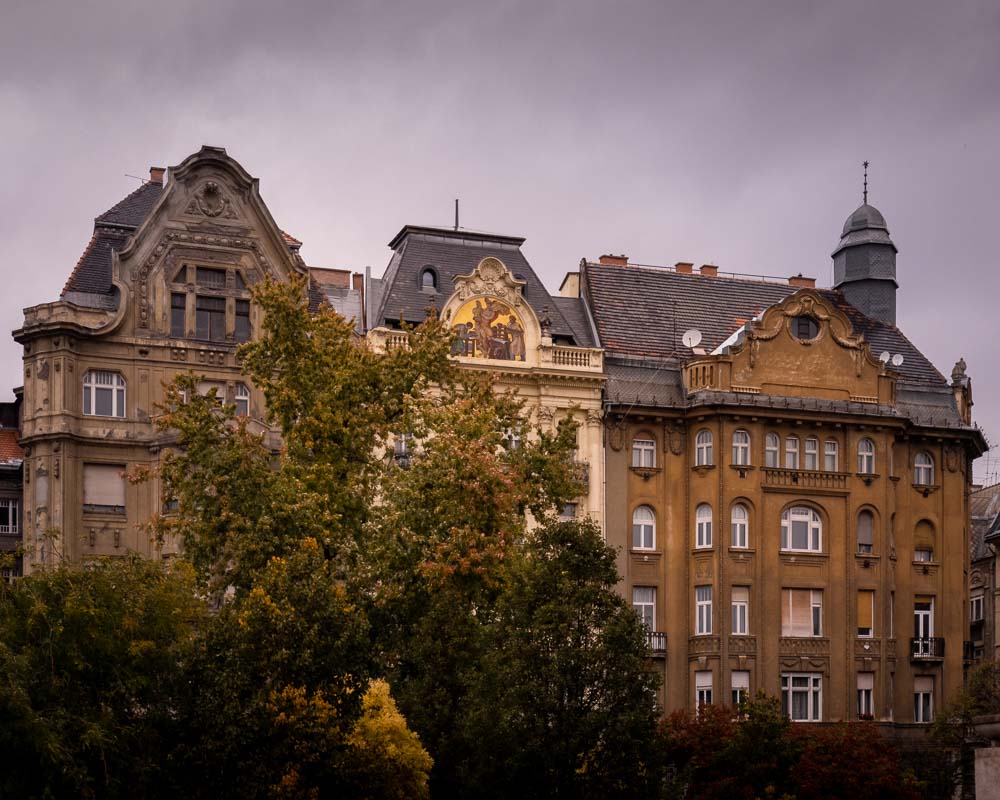 But it is getting late, and we must make our way to the next stop. With some reluctance, we make our way back to the 2 tram (that rides along the Danube) to the Liberty Bridge where we can catch the 49 tram back to the hotel. In the daylight – the old train station looks sad and unwanted. 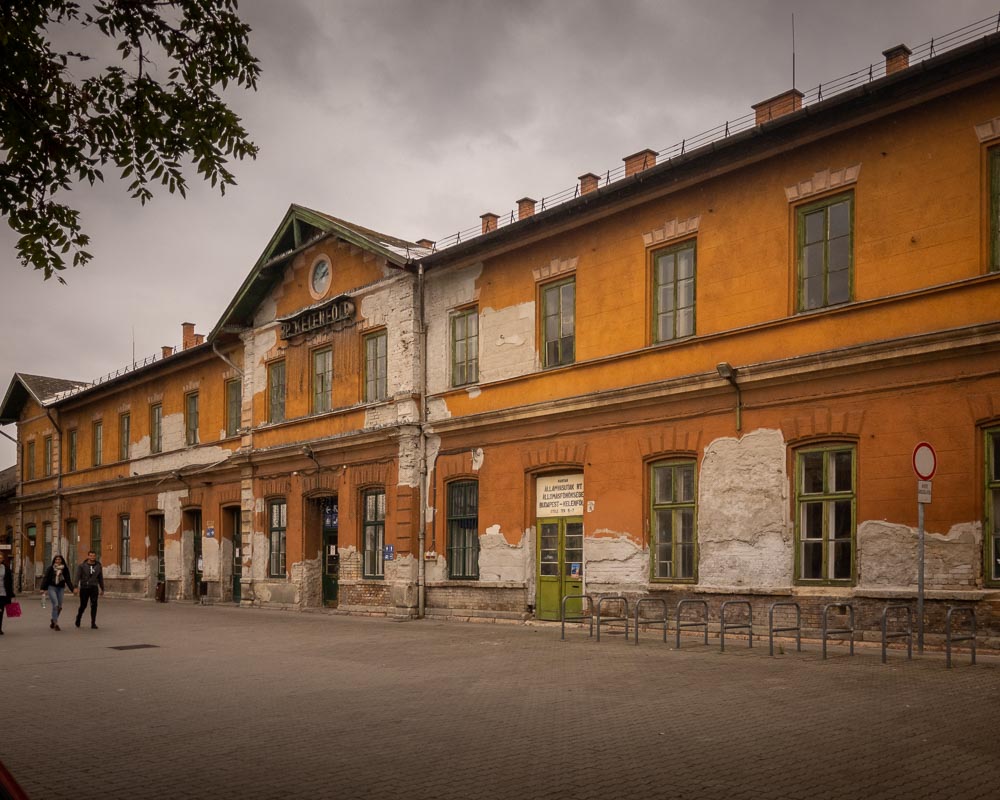 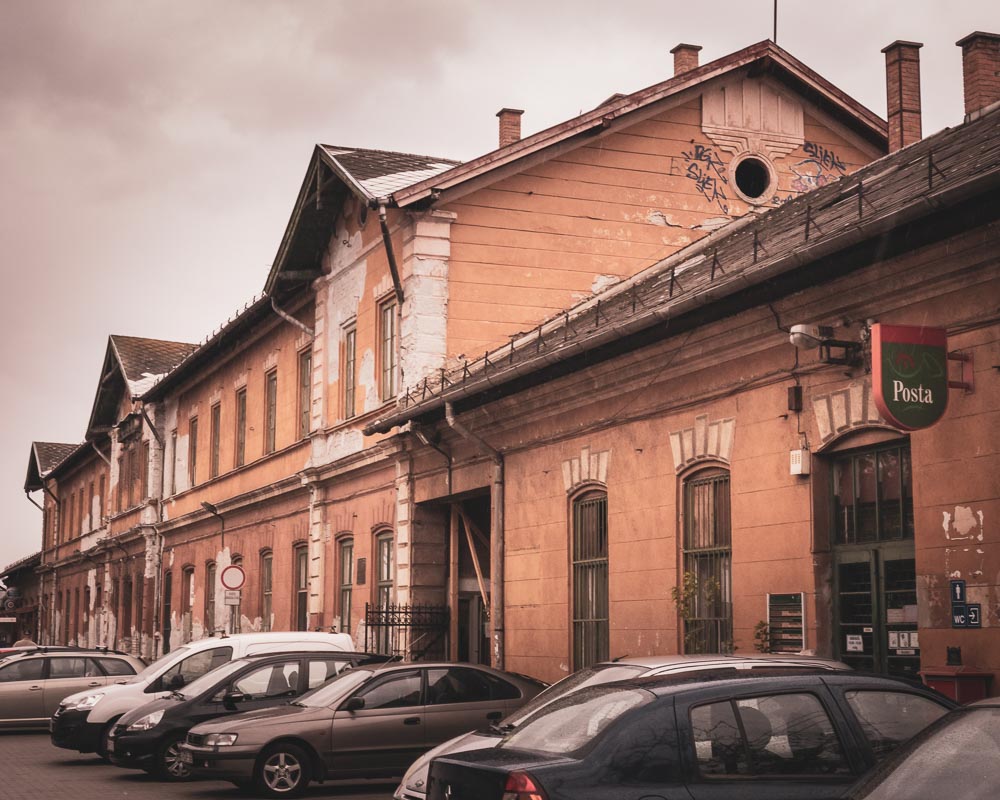 Margaret Bridge, or Margit híd, is the second-oldest public bridge in Budapest built between 1872 and 1876. All the bridges of Budapest were blown up in World War II in January 1945. During reconstruction, much of the original steel material was lifted from the river and incorporated into the rebuilt structure. 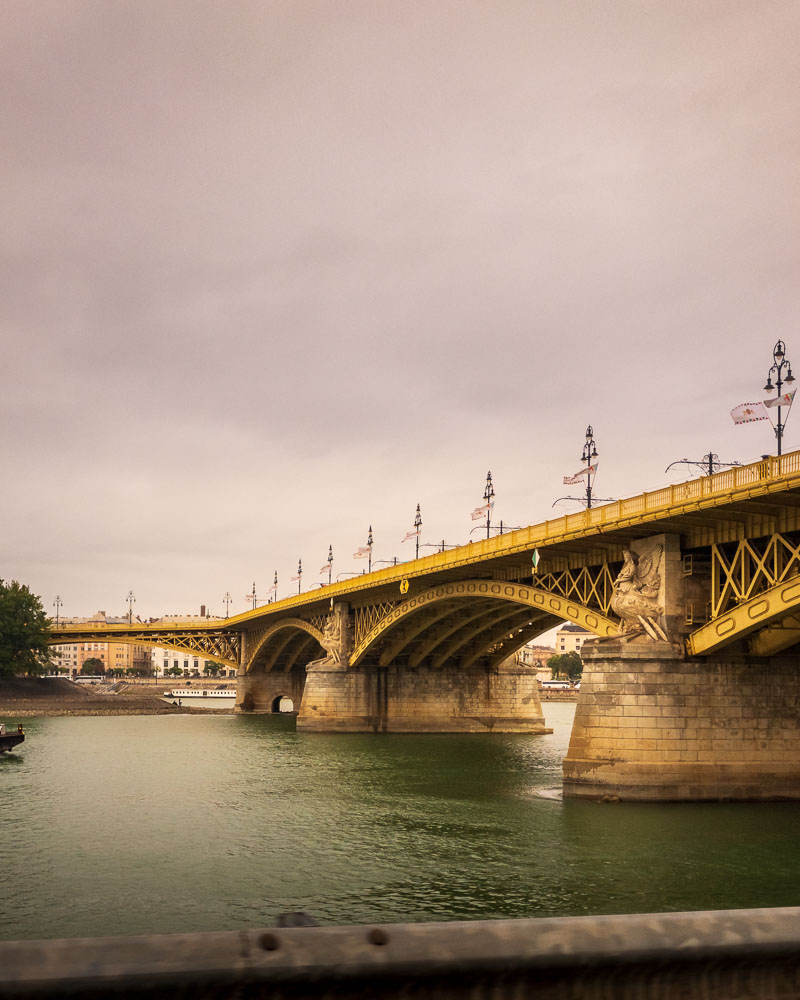 We walk back to the hotel parking lot to pick up the car – one final stop in the restroom and we are on the way to Slovakia. On the way out of town, we are treated to a final few beautiful sights as we wind our way along the Danube toward the autobahn.