Pass through the Castle Garden Gate and turn right to head to die Reichsstadtmuseum (literally the Imperial City Museum) or Rothenburg Museum. Opened in 1936, it is located in the dormitory building of the former Dominican Convent. The museum covers the history of Rothenburg during the time it was a Free Imperial City (1274-1802). Unfortunately, time has not been kind to the building. It had been (prior to 1258) a farmhouse that had been donated for the purpose to convert it into a convent. Construction began and nuns were able to move in as early as 1259. The convent (and attached church) grew through the 14th century reflecting the increasing prosperity of the convent. The last extension in the convent's history was in 1518 - the so-called “Priory Building."

After the introduction of the Reformation in 1544, fewer and fewer nuns were located at the convent and 10 years later the last nun died. The entire convent property passed into municipal hands although there were no plans for the buildings themselves. In the following years, the premises served as the apartment for the monastery caretakers, as a parish widow’s residence, and a storage for grain. From 1724 onwards, building activity was once again brisk throughout the convent: attics were redesigned, a hall in the north wing was covered in stucco and converted into a banquet hall.

When the Bavarian state ended the freedom of the empire in 1803, the entire property was confiscated and the church was demolished in 1812 and meant that the link to its history was lost. Indeed, the vault of the sacristy was torn out in order to be able to run a rental office on the 1st floor, the façade was also redesigned, a new staircase was added, and the priory garden was torn down. Indeed, the building remained completely ignored through the 19th and early 20th centuries. 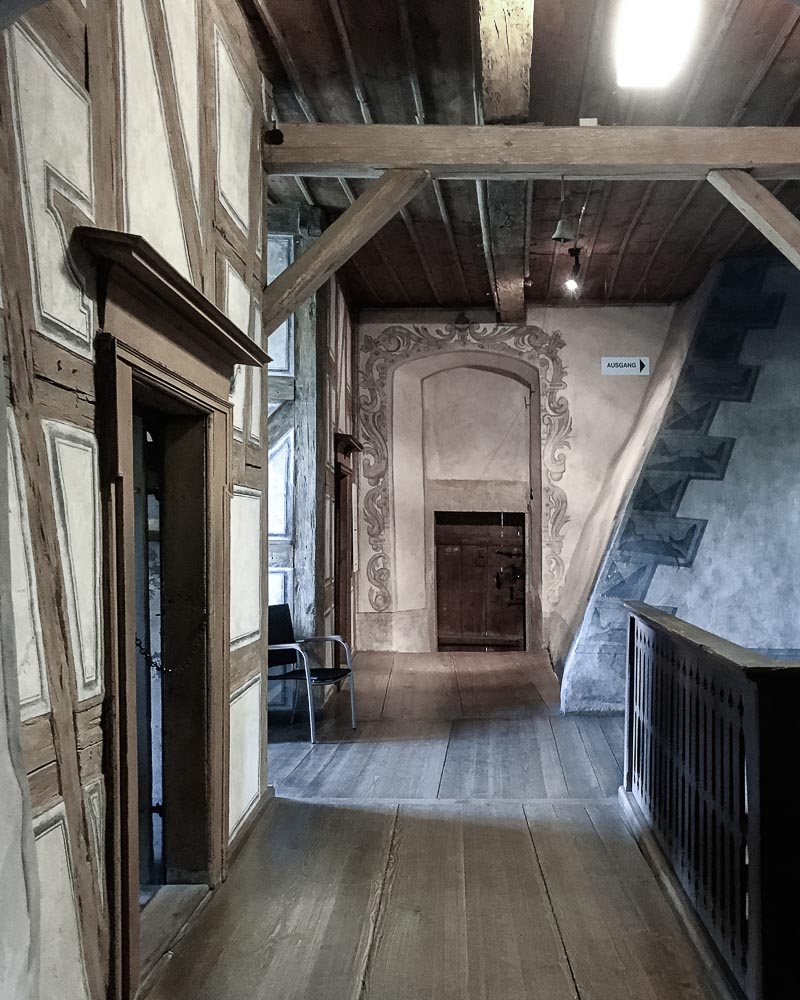 Except for the southern part, the cloister of the is still in its original state from its year of construction in 1258. The southern cloister was demolished when the church of the Dominican convent was destroyed in 1812 and was only rebuilt true to the original in 1980. The inner courtyard once served as a medicinal herbs garden.

In the cloister are the original figures of the façade from the Master Builder’s House representing the seven vices and seven virtues although these original statues are very time-worn and missing parts. I can certainly understand why they were replaced on the house. From here, I am able to access the old convent kitchen. 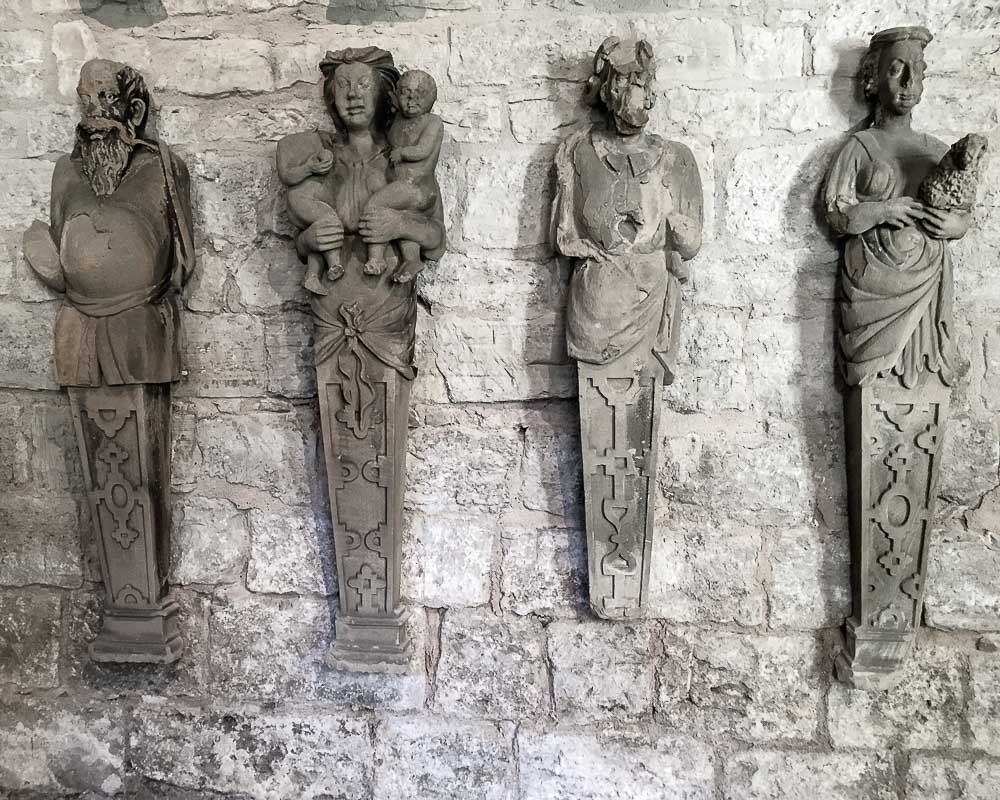 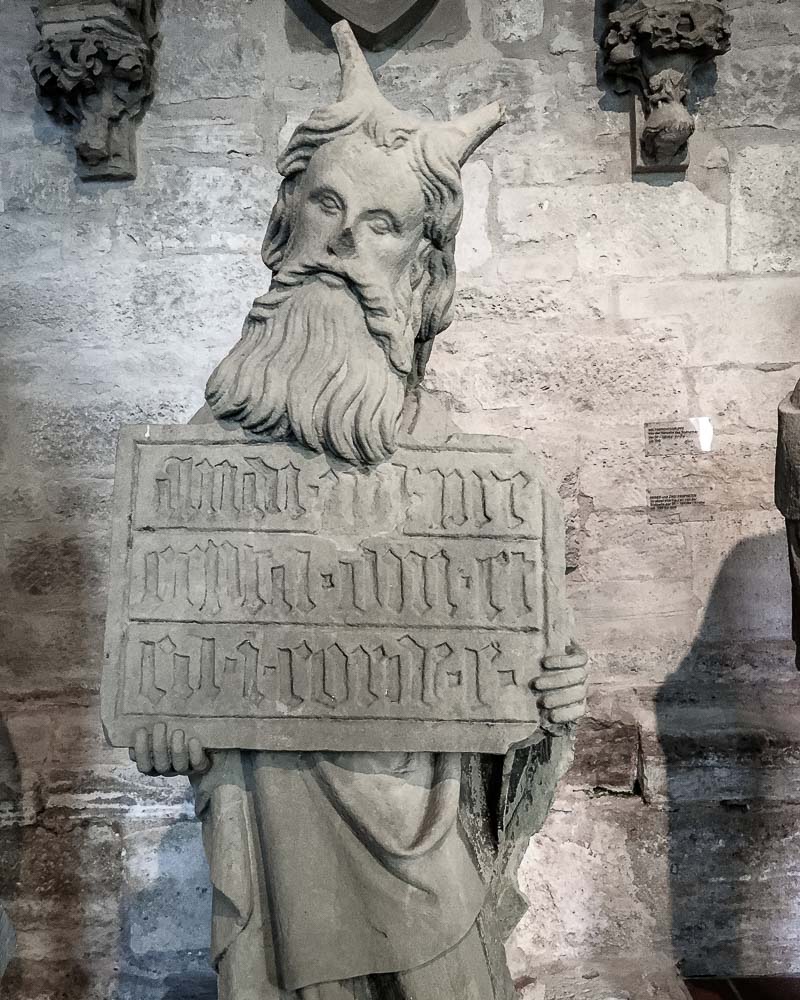 The convent kitchen – from 1260 – is one of the oldest of its kind in Germany. Additionally, the outer walls consist of the last remains of the oldest city wall in Rothenburg from the 13th century. There are two interesting things about this kitchen – in addition to its age. One is the the lazy Susan the nuns would use to give food to the needy, beggars, and pilgrims outside the convent without being seen. This is where the Dominican nuns who lived in the convent used to cook. The second is that on the present wooden staircase was once the dumbwaiter to the residents’ dining area. 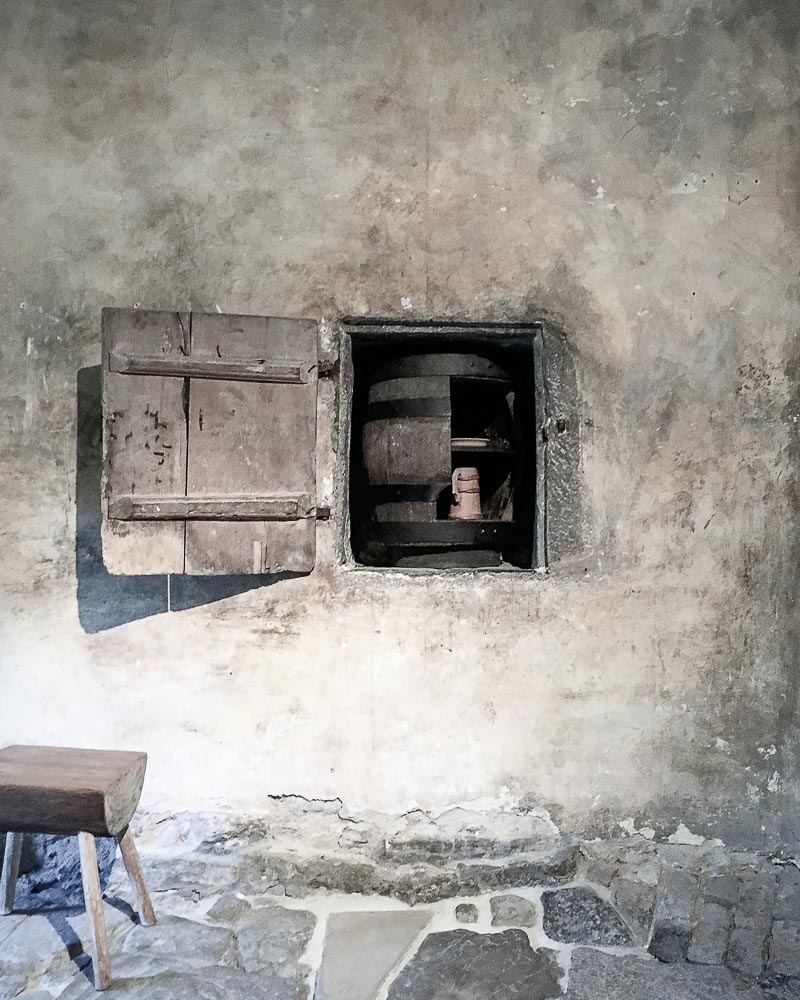 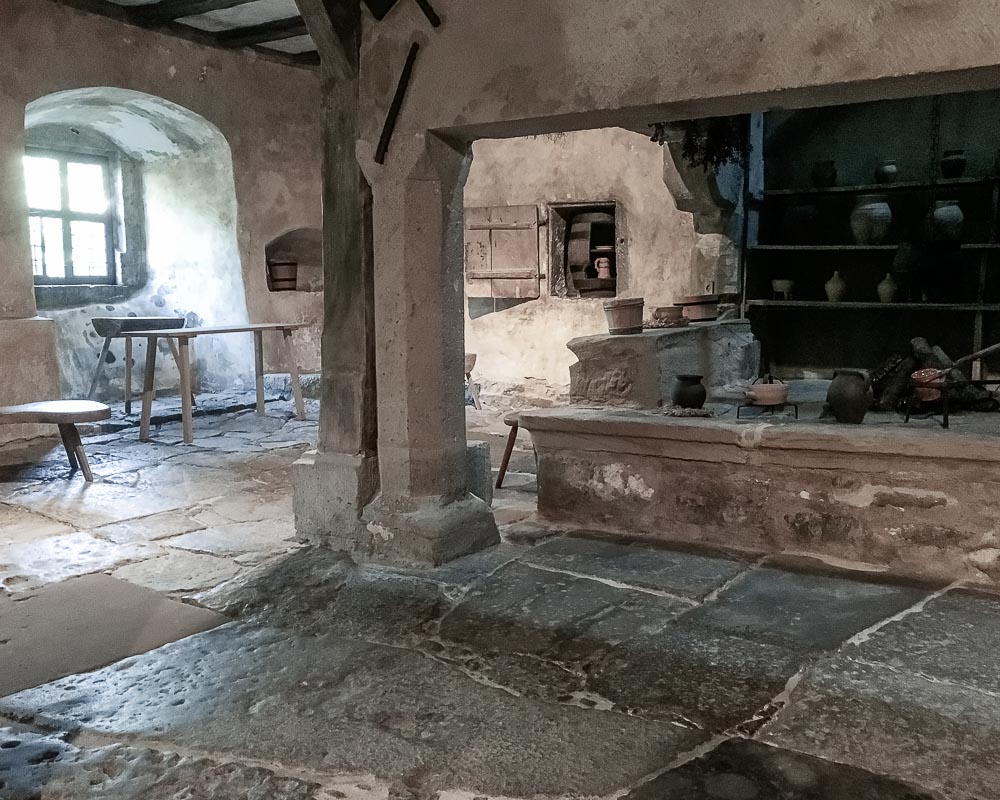 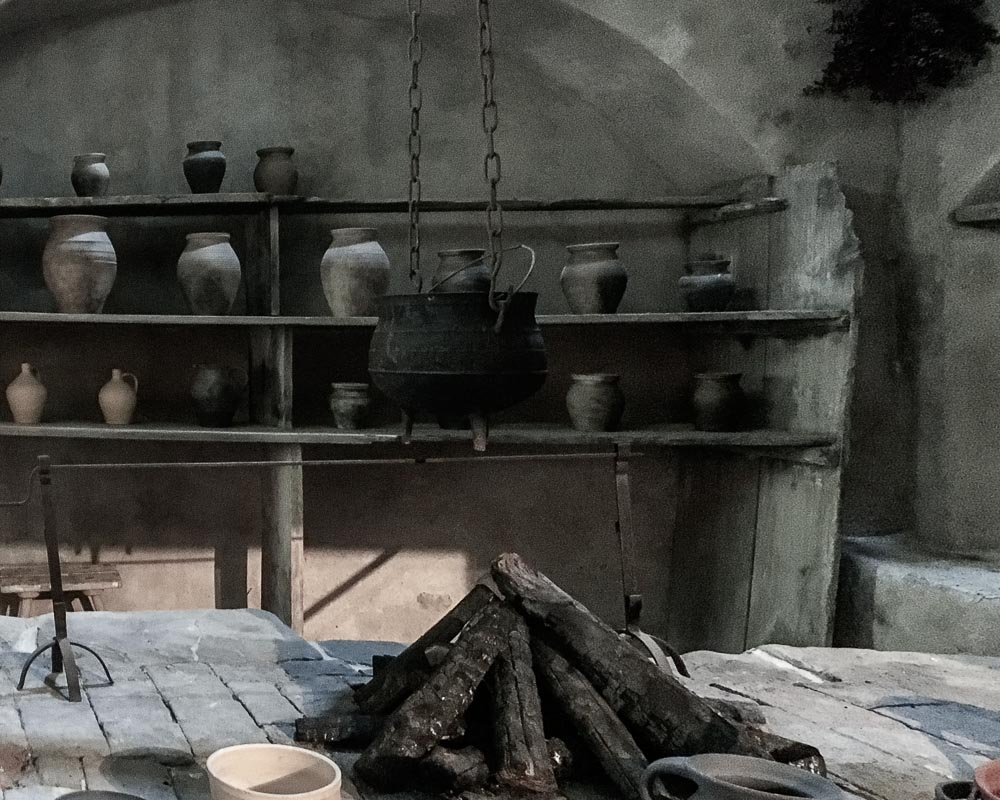 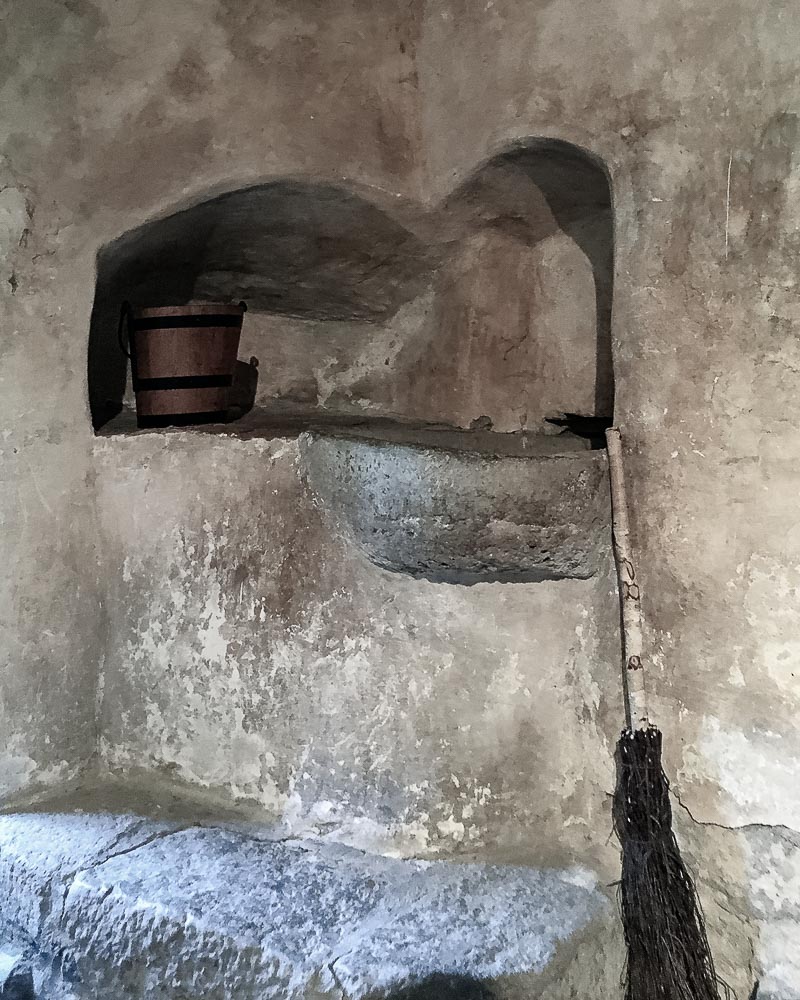 Much of the exhibits are of weapons – but I do find the armor to be very interesting since I have only really either seen photos or re-creations of armor.

Since 2000, the museum has housed some 800 exhibits of weapons from the Stone Age (hand axe) to the middle of the 19th century. These have been collected by an entrepreneur (Herrmann Baumann) since the end of WWII and donated one of the largest weapons collections in Europe to the museum. 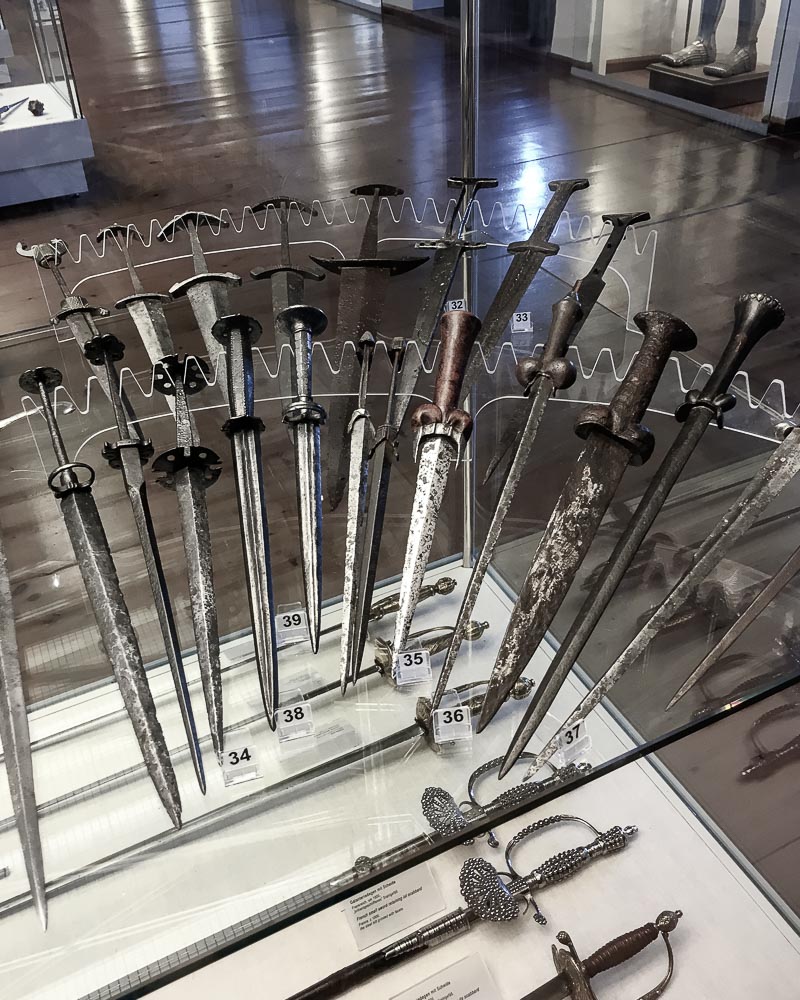 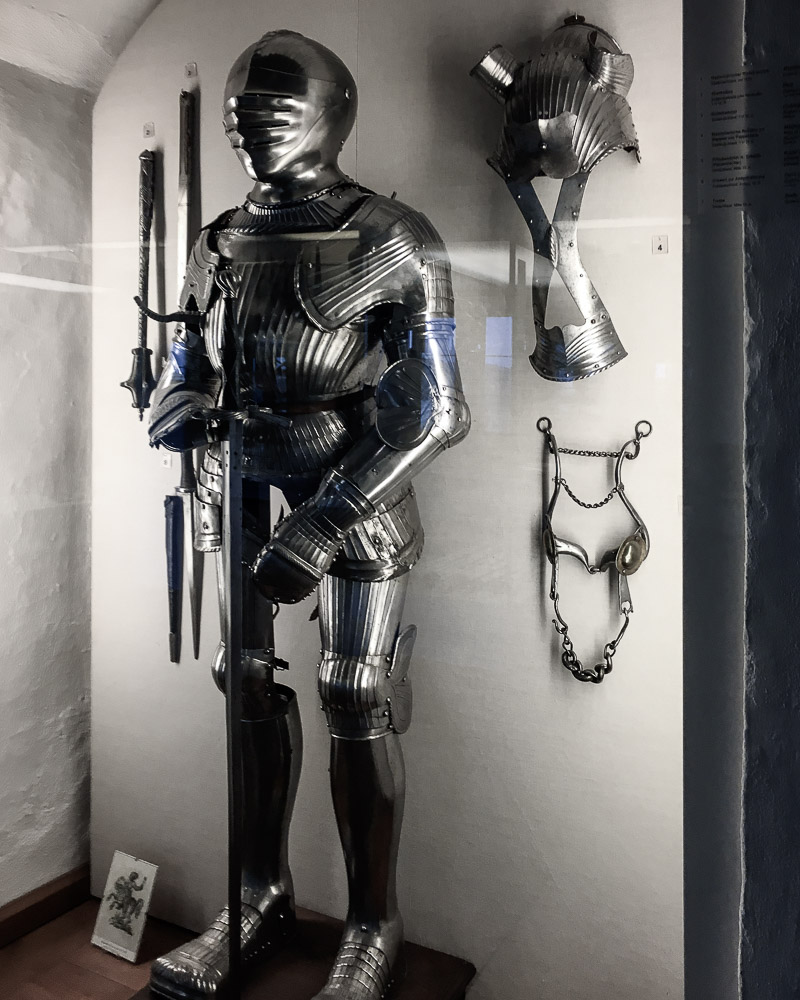 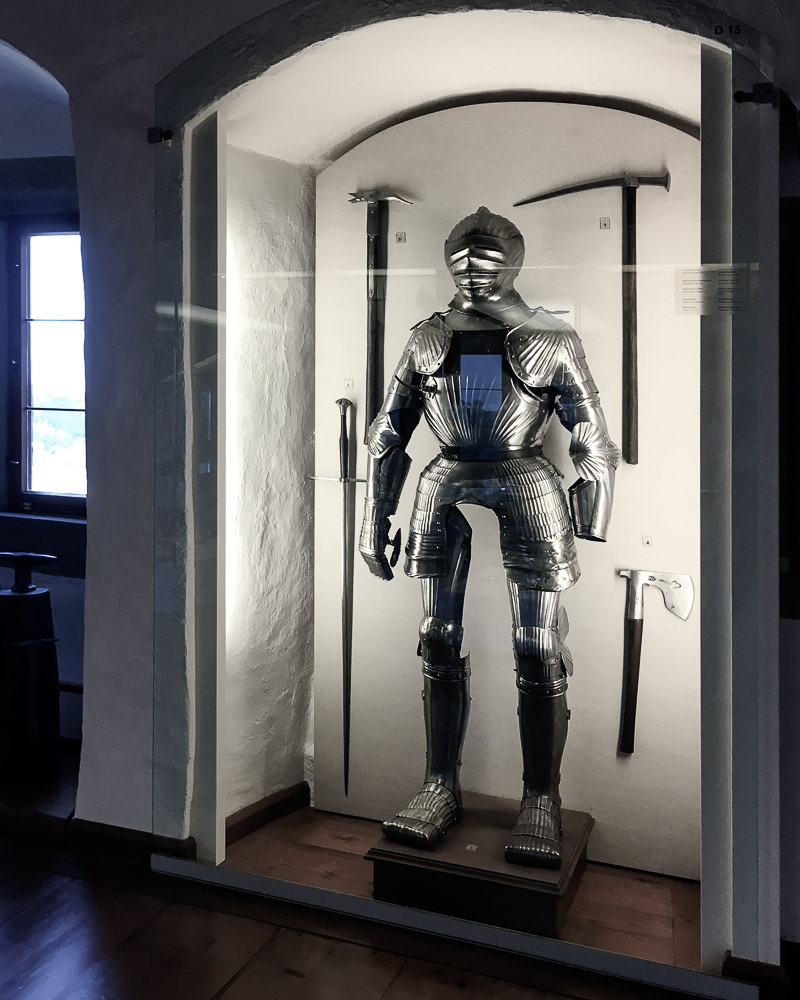 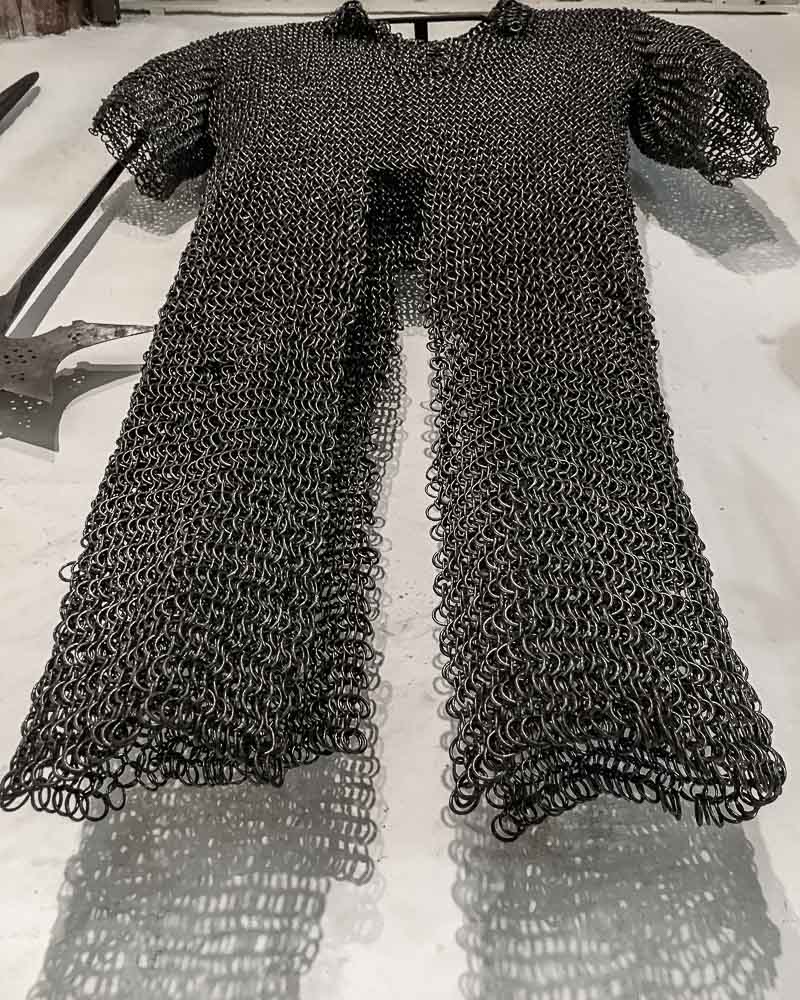 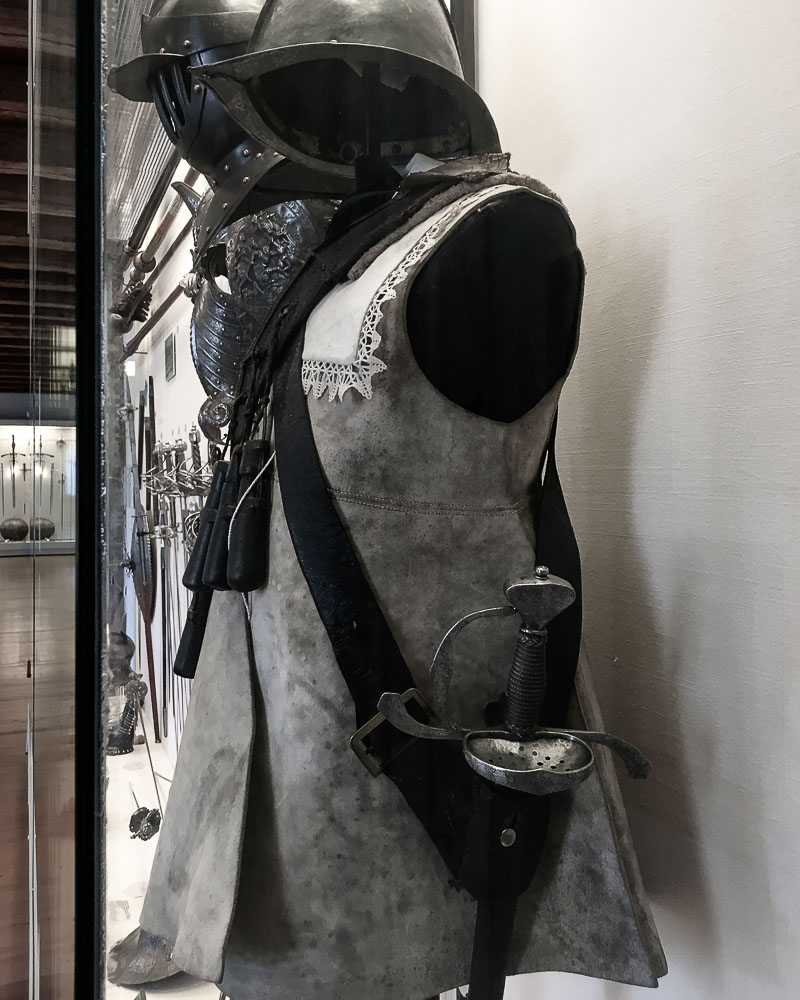 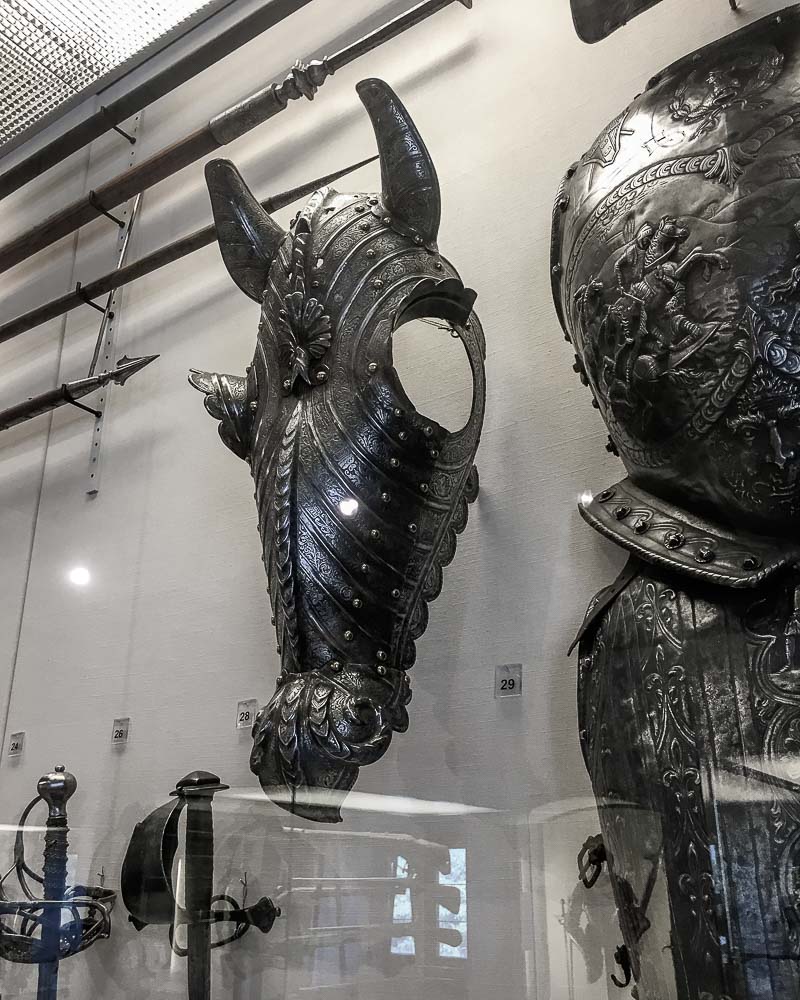 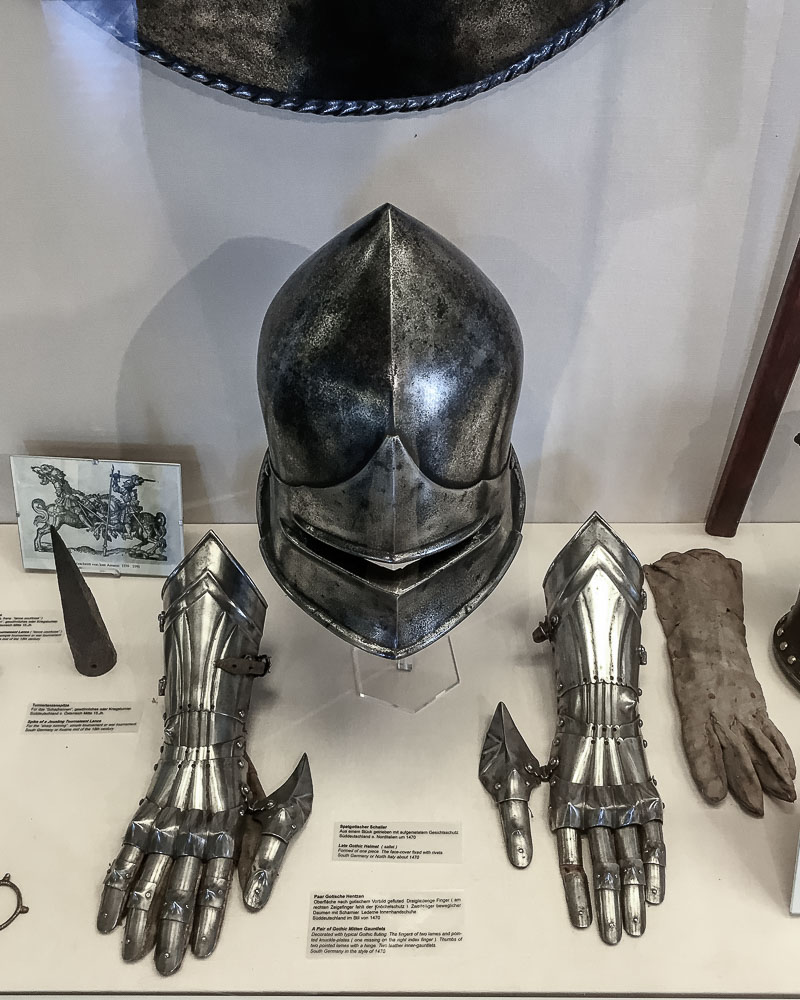 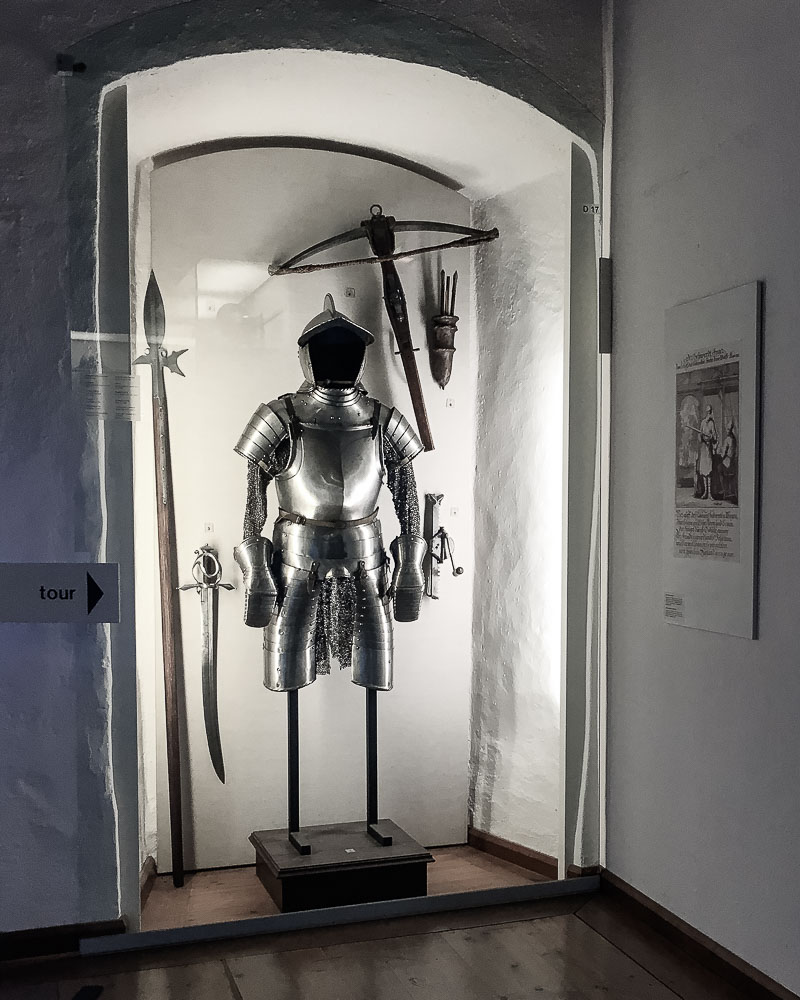 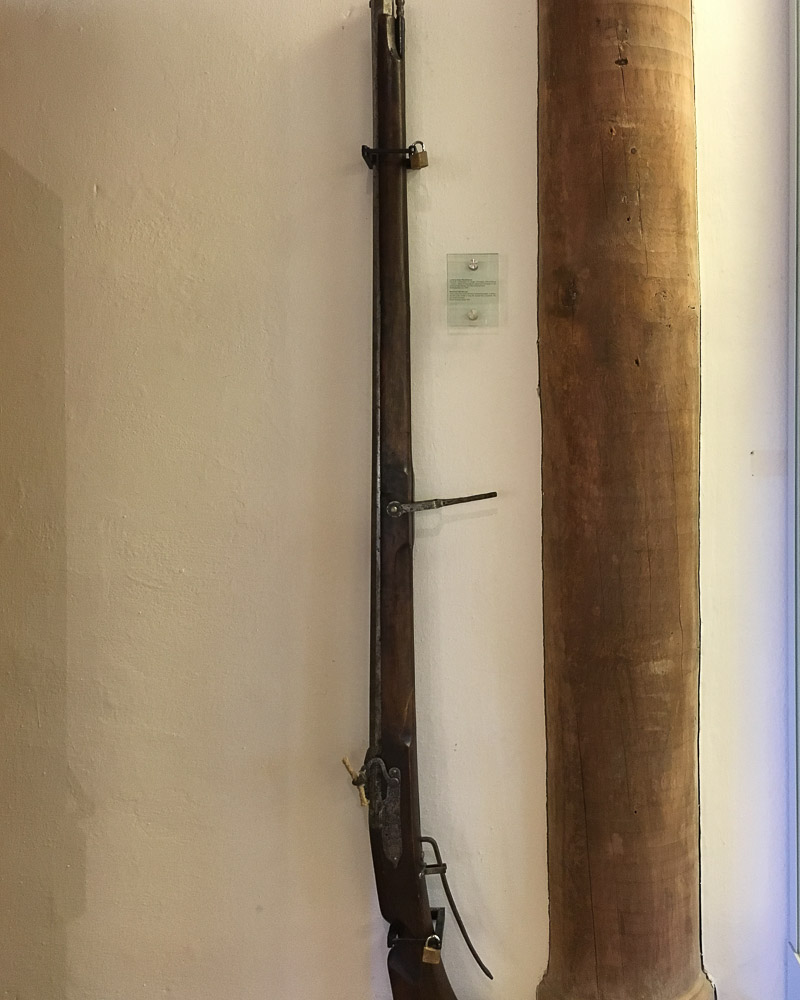 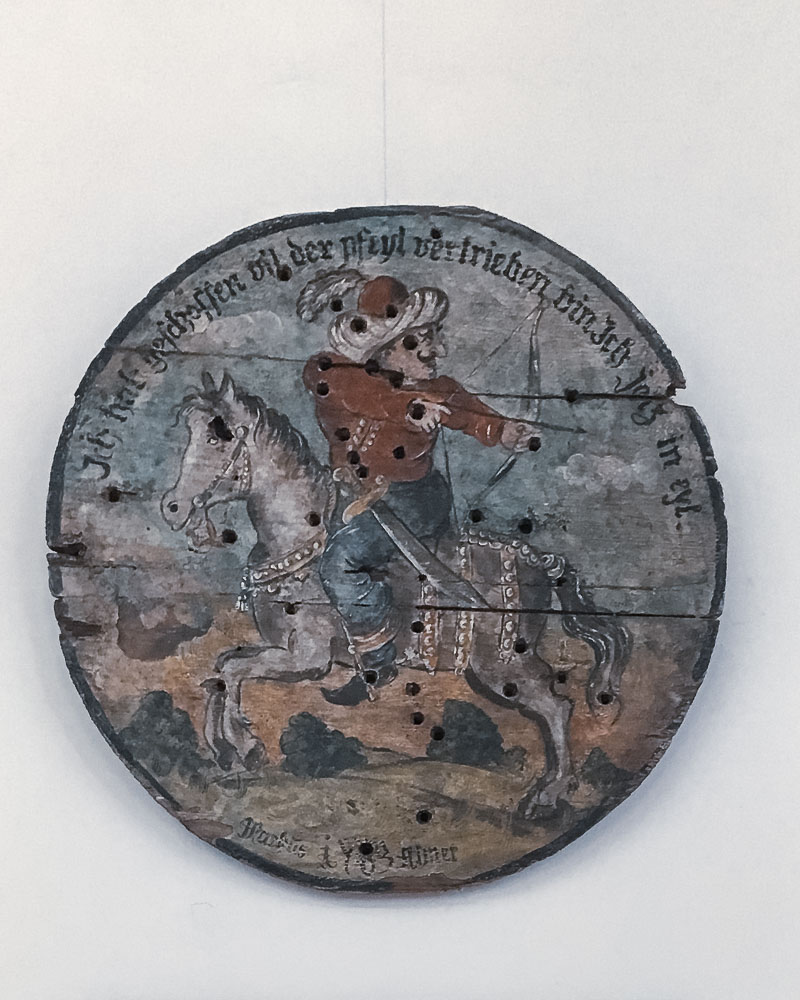 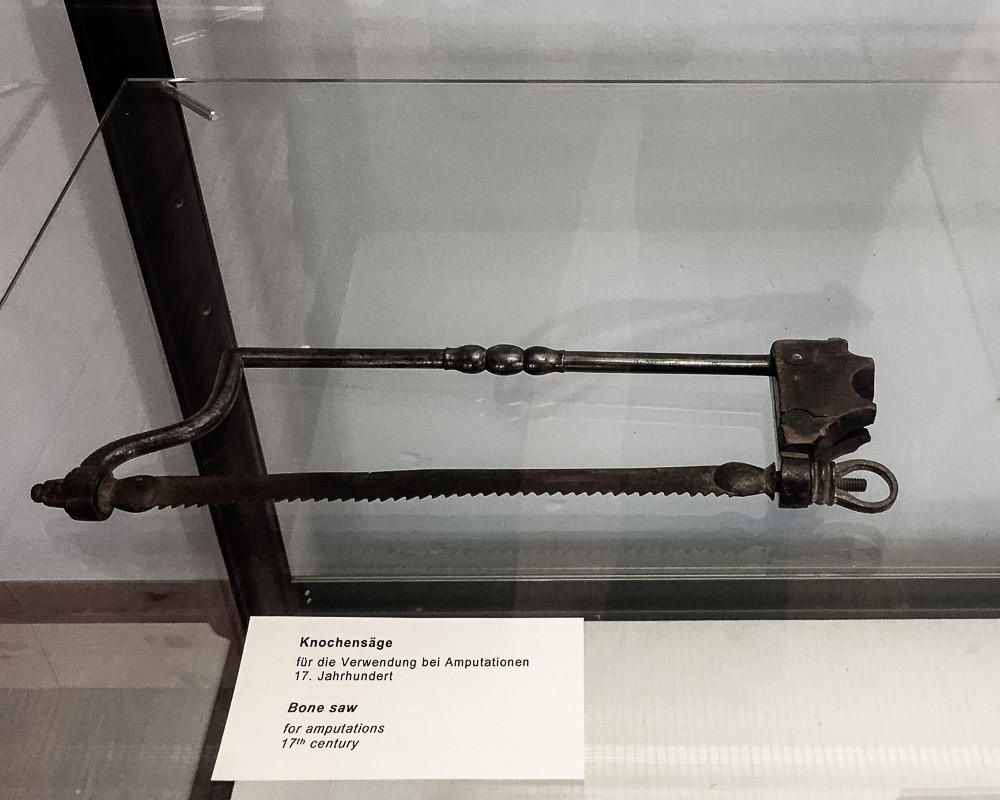 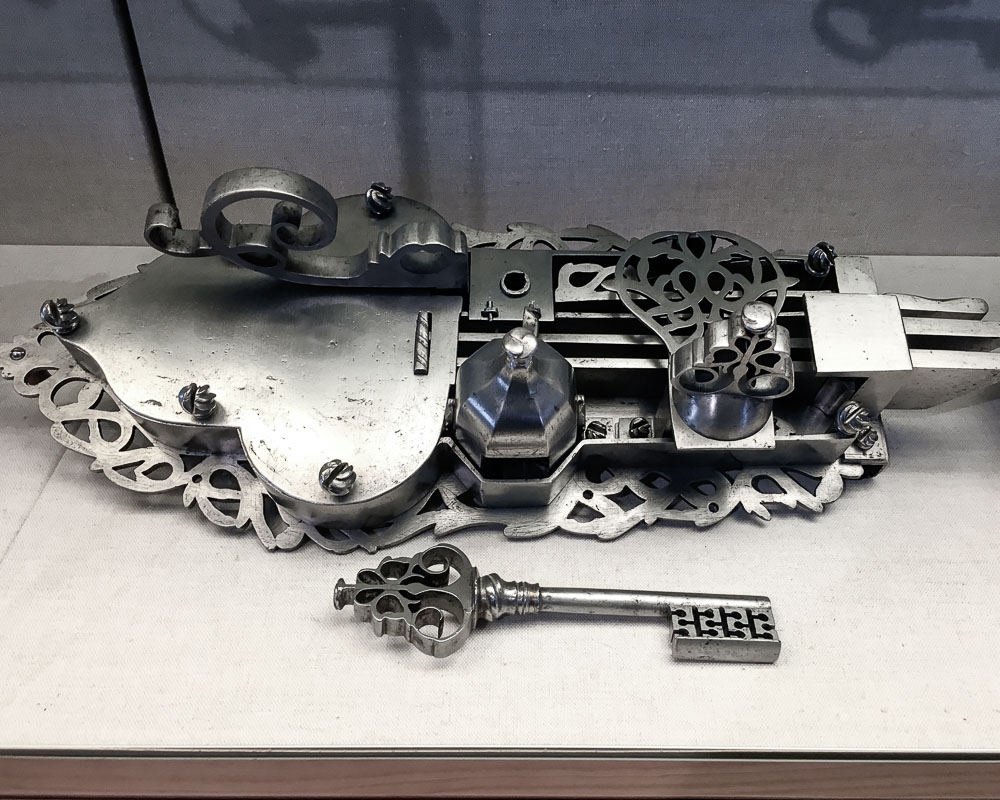 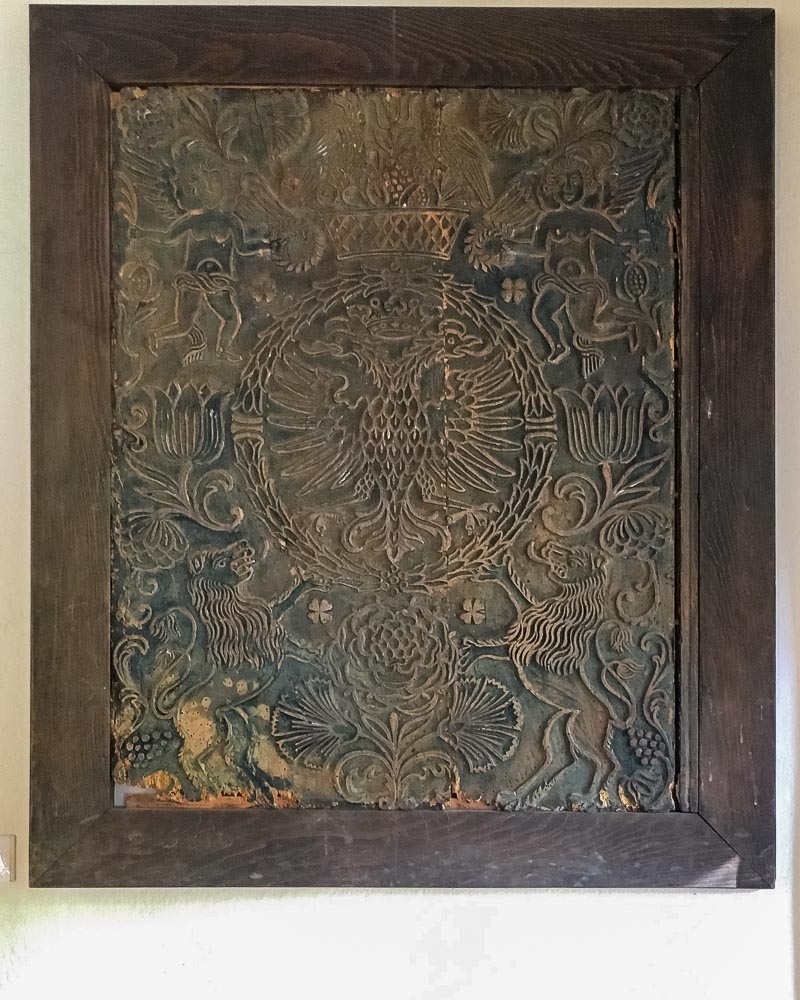 Apparently Herrmann Baumann not only collected weapons but also faience – jugs and vessels. The exhibition of 400 faiences in the museum is divided according to regions and manufacturers. While I do find this interesting, I am pressed for time and – seriously – if you’ve seen one jug you’ve seen them all. No, I do need to keep to a loose schedule. I move on to the last room – a pharmacy. 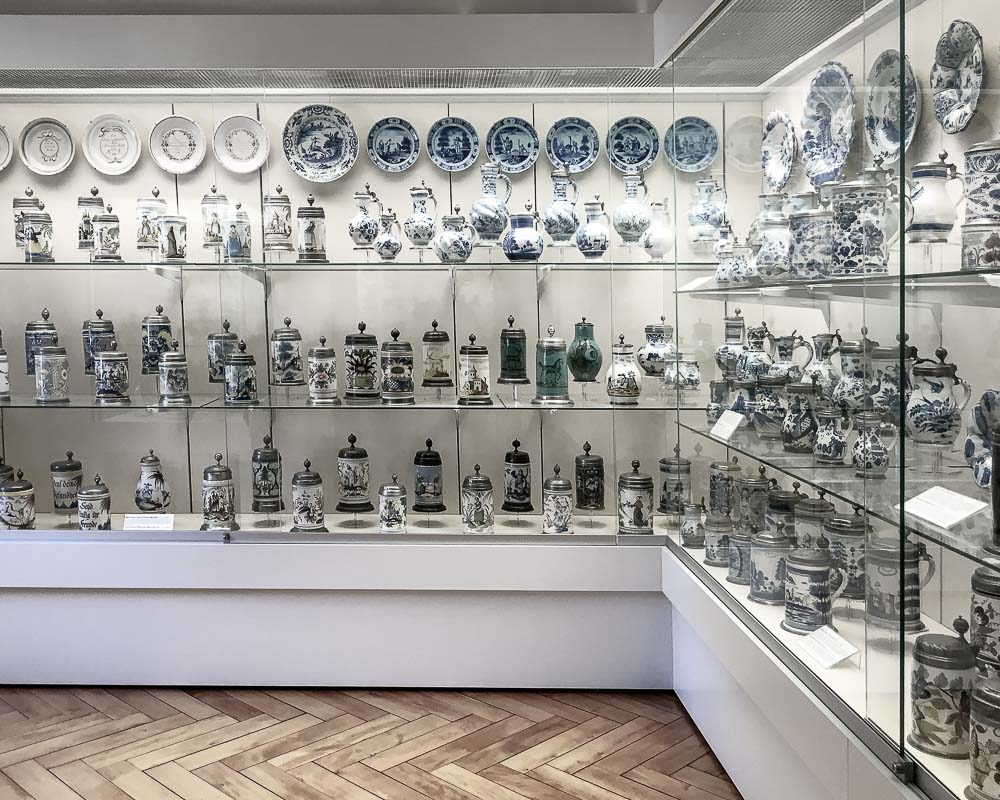 This exhibit the completely preserved front room of the former Saint George Pharmacy (1708-1991). WHereas the Saint Mary’s Pharmacy (1812-present) in the Jagstheimer’s House is the only remaining pharmacy in central Rothenburg, there once was as many as three on the Market Square: Saint George, the Mohren Apotheke (1600- late 1700s), and the historic Löwen-Apotheke (1374-2016). Along with the hospital in the Infirmary Quarter, the pharmacies were very important to Rothenburg’s history.

I am through the museum and, although I do feel I spent enough time in here, I know I need to move on to my next stop – the Criminal Museum – before leaving Rothenburg. Let’s see what this has in store… 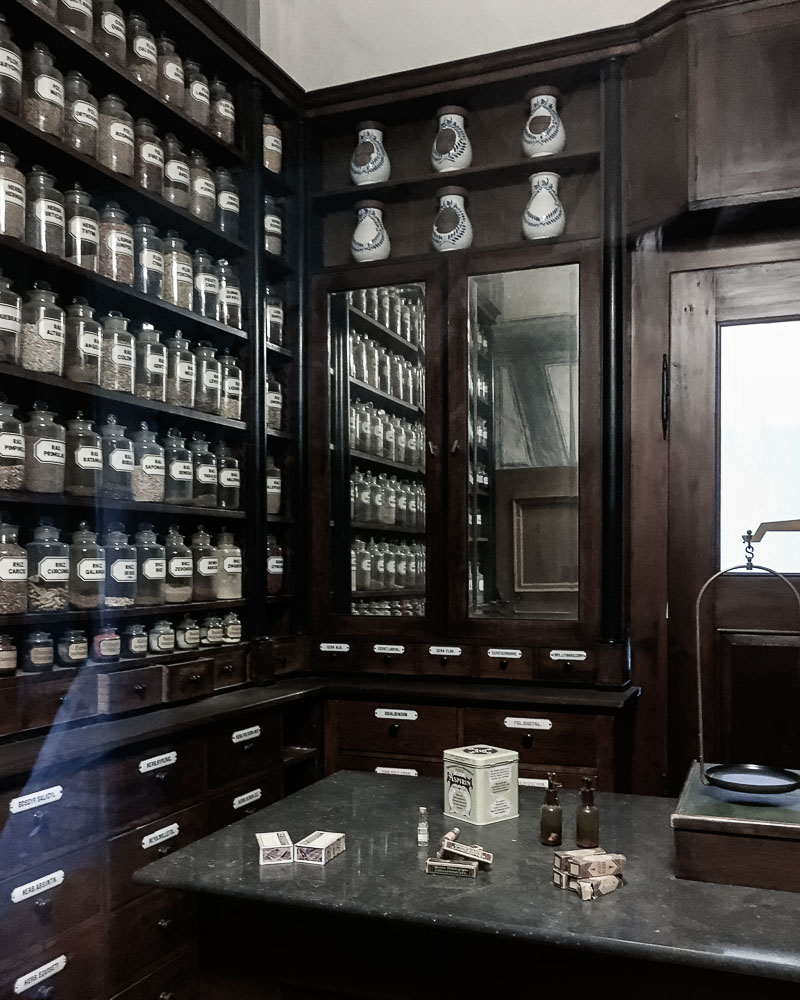 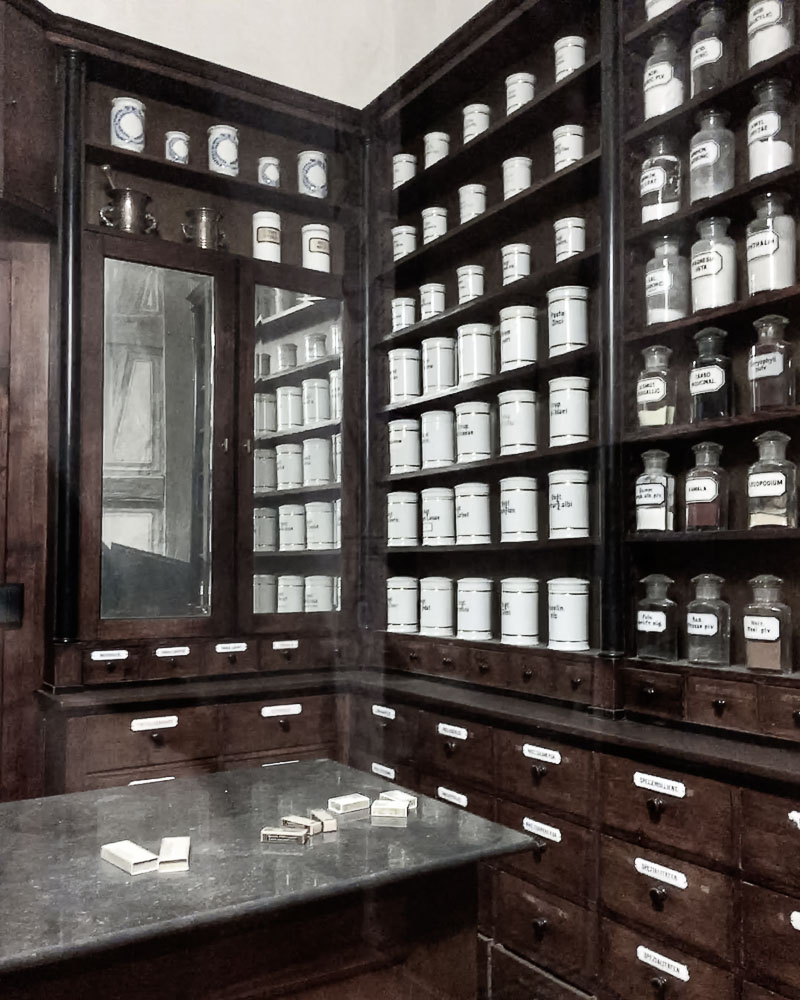