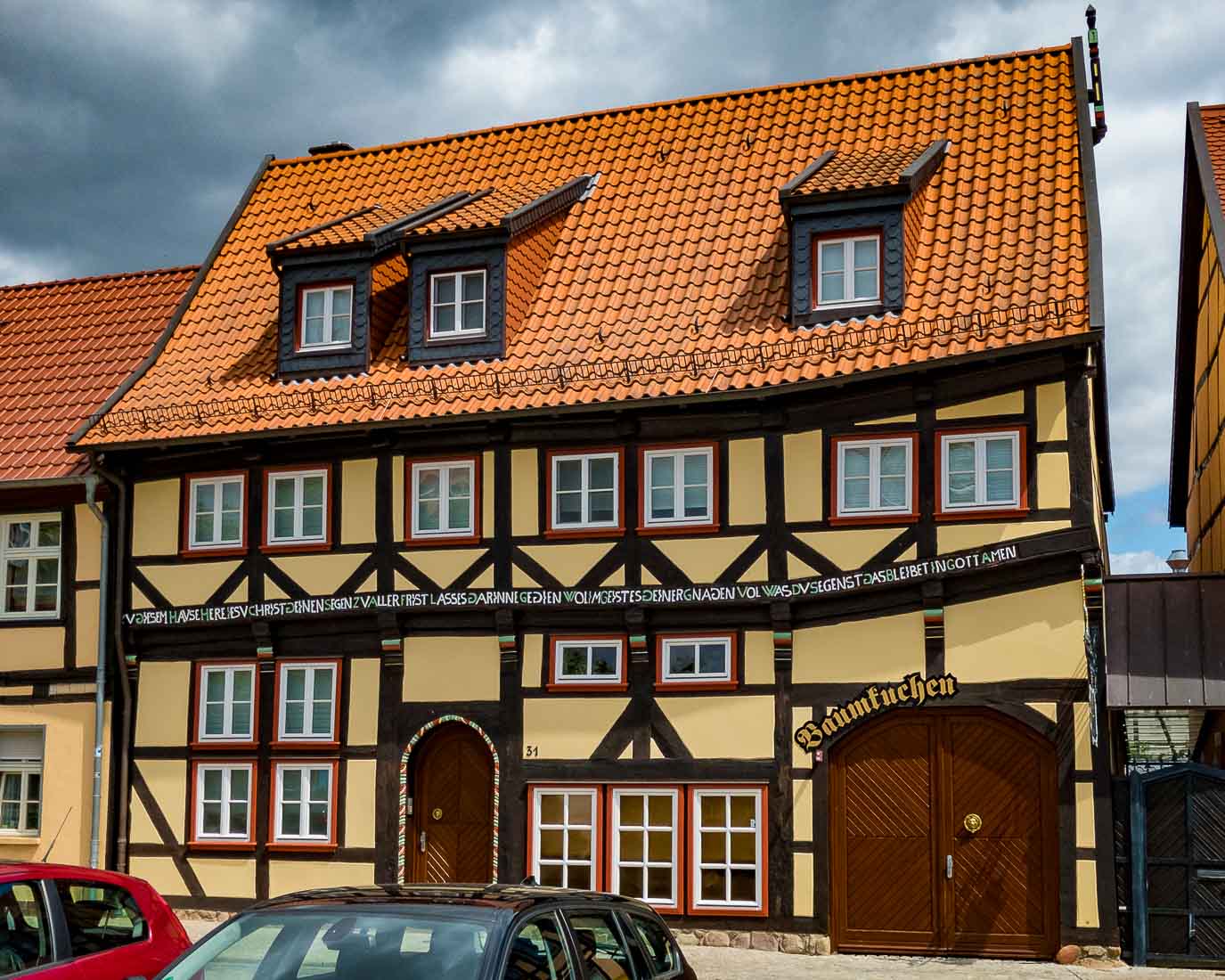 his day, in early July, Olaf and I are pondering what to do. Well, we know we are going for a bike ride - but to where? After some contemplation, we decide to see if there is an off-road way to Salzwedel. Maybe it will be included in the tour book.

This will be one of our shorter rides – Salzwedel is only 14 km away – so we pack light and chart a course on our handy biking app. About an hour later (we had a few detours) we arrive in Salzwedel. Surprisingly, the town seems to be quite active – especially for a Sunday. As there appears to be many pedestrians, we decide to walk rather than ride through the streets of the inner city. As we approach a café, we decide we deserve a “coffee and cake” break.

“Ein Glück!” says Olaf as we find an empty table for two outside. Not only for the open table, but also for a demonstration that had been set up on the sidewalk. He says we are in for a treat – we are at the “Erste Salzwedeler Baumkuchenfabrik” – the First Baumkuchen (Tree cake) Factory of Salzwedel and it looks like there will be a demonstration on how this very special cake is made. The history of the cake is really interesting. 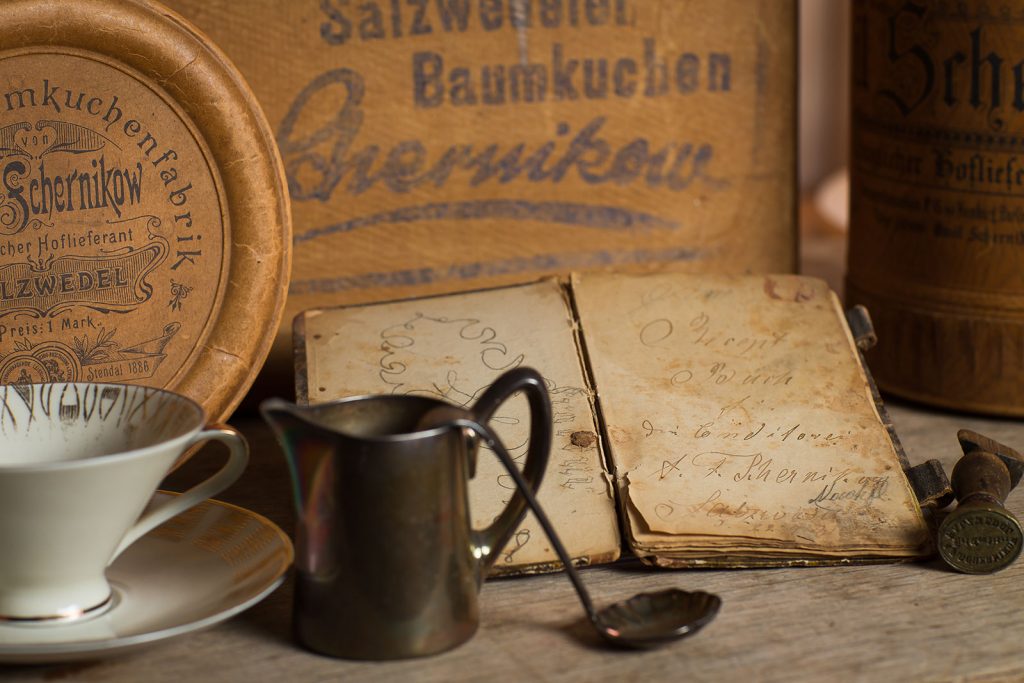 Baumkuchen is a pastry – a cake – that got its name from the way it looks when sliced. Literally “Tree cake” – the layers of cake look like the rings of a tree when sliced. It was usually served on special occasions and festivities and has more than 200 years of history. In 1807, Johann Andreas Schernikow learned the recipe in Lüneburg and brought it to Salzwedel. It was here that the he refined the recipe; flavoring the cake with spices of the time. In 1865, the Salzwedeler Baumkuchen-Manufaktur was appointed “imperial and royal purveyor to the court” by King Wilhelm I.

After the reunification of East and West Germany in 1991, the owner of the recipe at that time – Oskar Hennig – founded the “First Salzwedeler Baumkuchen Factory,” which still operates to this day. 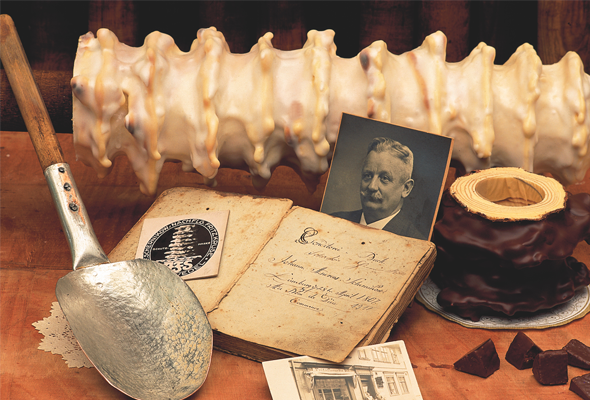 The original recipe for Baumkuchen has been passed down from generation to generation and is now owned by the Hennig family from Salzwedel. Over the more than 200 years, the recipe has never changed and, today, the cake is handmade according to the recipe from 1807 – baked over an open fire in a rotating wooden roller. 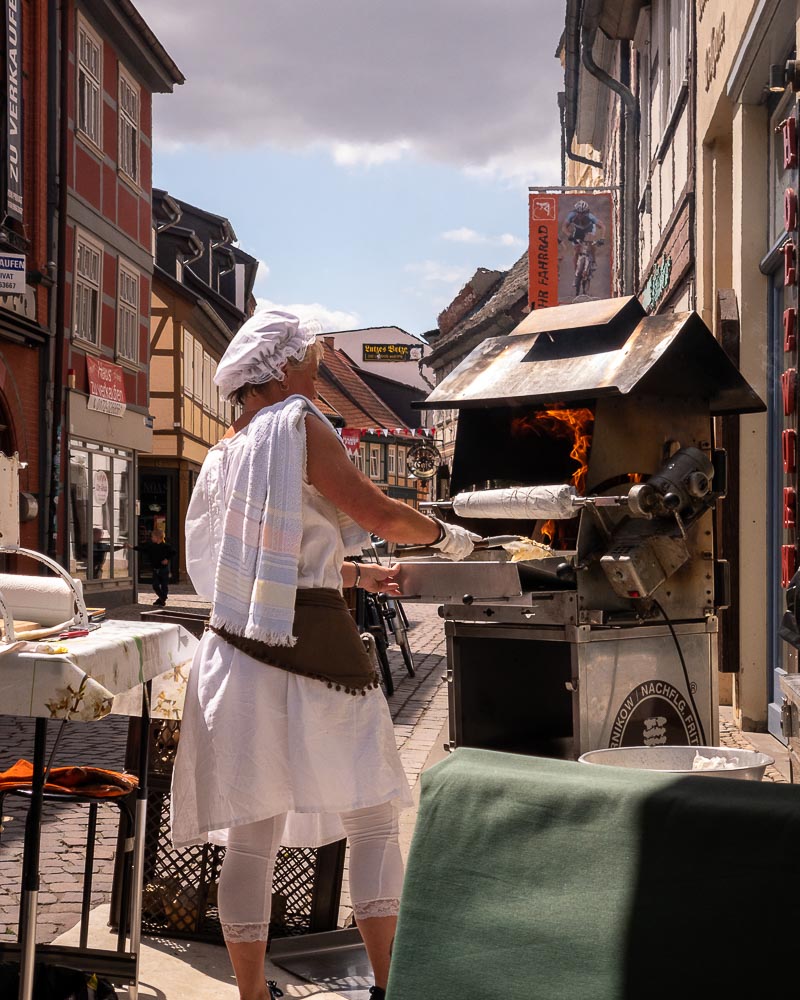 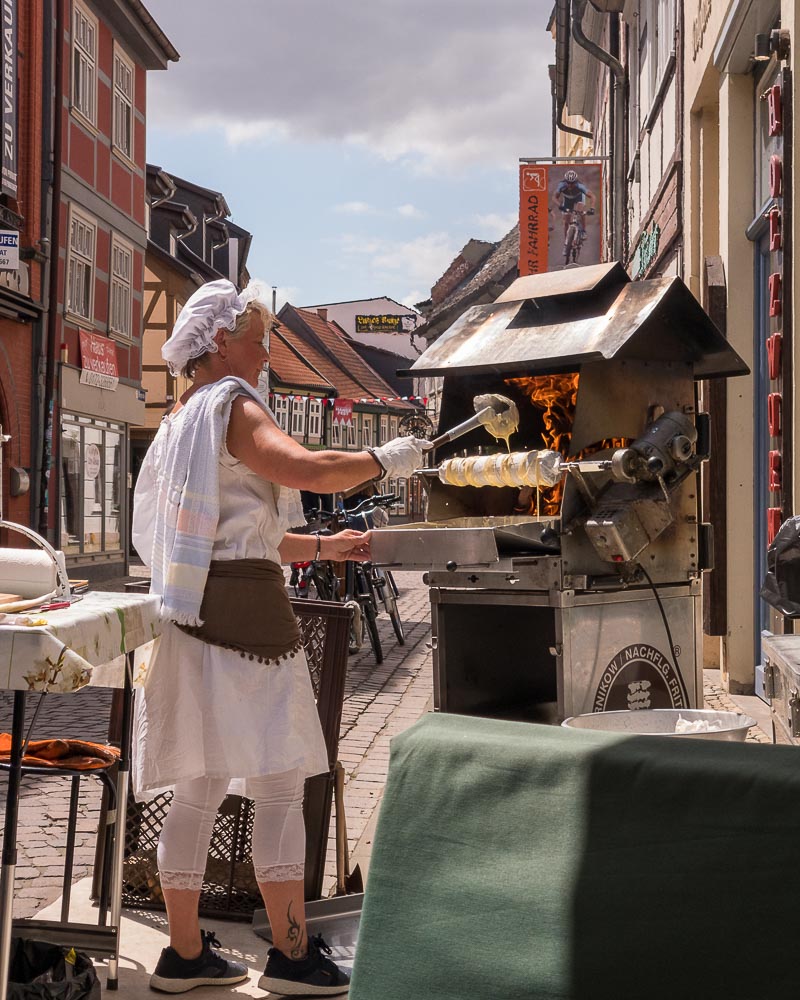 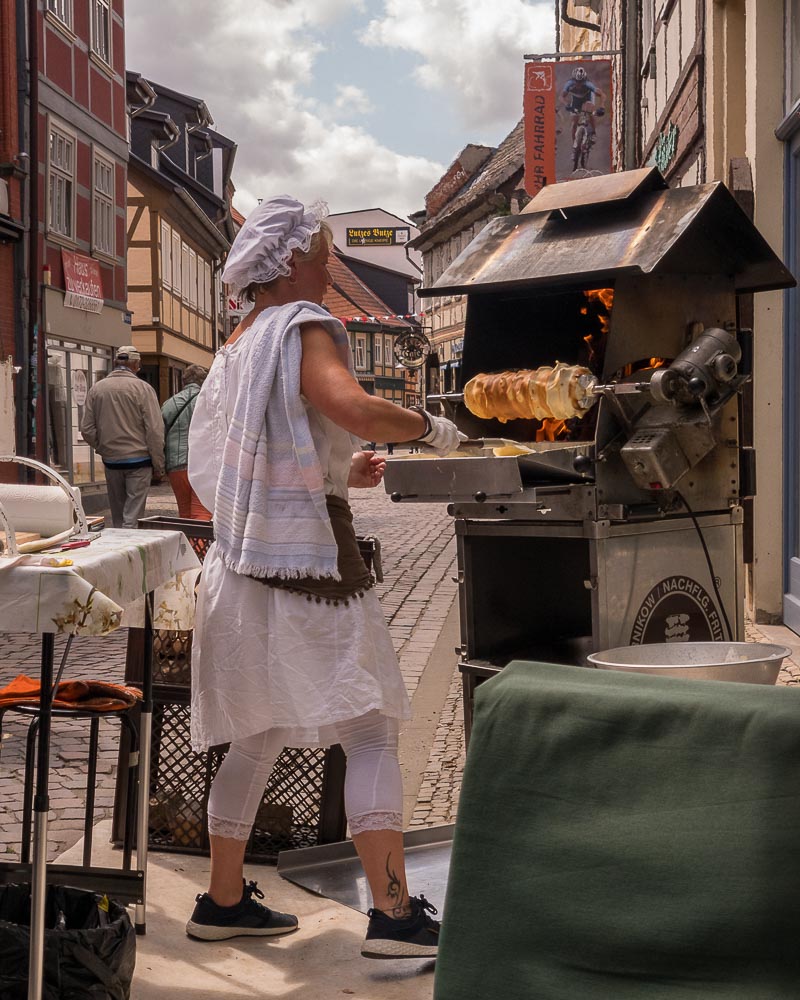 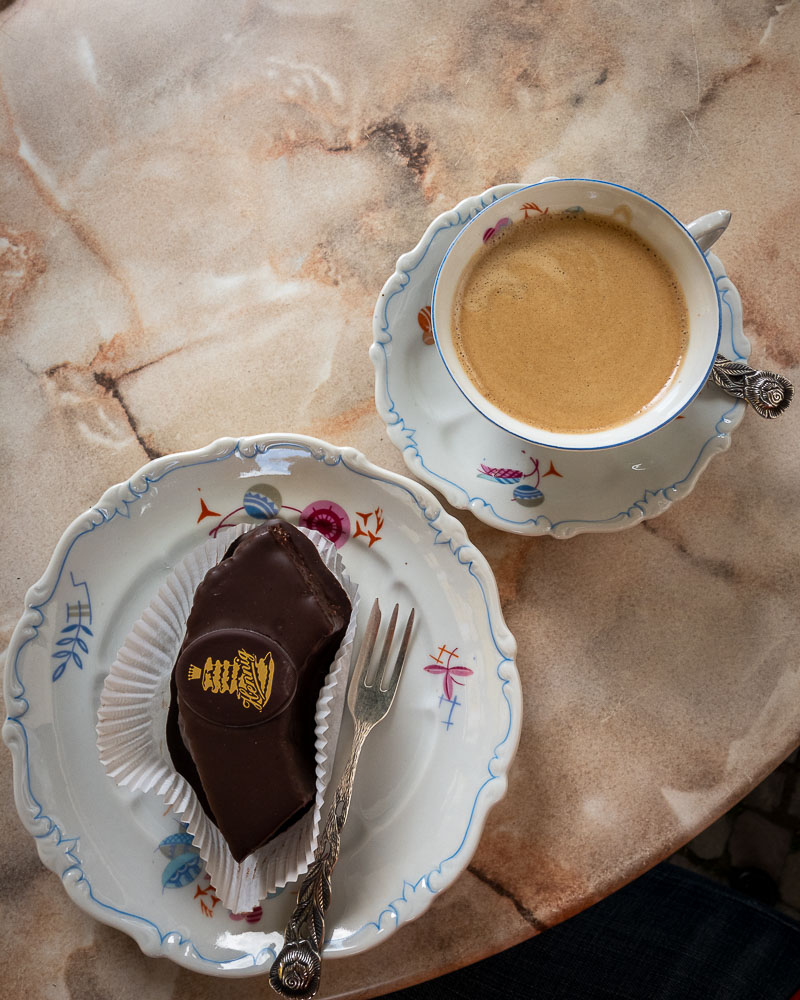 The cake was so pretty that I didn’t want to actually eat it but – ultimately – I did. It was delicious. And watching how it was constructed made me appreciate the skill that was needed to make it. After we finish our coffee and cake, we continue our tour of the town. As happenstance has it, it seems to be Hansestadt Days, so there is much to see.

A Hanseatic city is one that had joined the medieval merchant and city league called the Hanseatic League. The Hanseatic League was a medieval commercial and defensive confederation of merchant guilds and market towns in central and northern Europe. Growing from a few north German towns in the late 12th century, the League ultimately encompassed nearly 200 settlements across seven modern-day countries; at its height between the 13th and 15th centuries, it stretched from the Netherlands in the west to Russia in the east, and from Estonia in the north to Kraków, Poland in the south. These cities were mainly port cities in coastal regions, but also inland cities, especially on important rivers.

From 1263 to 1518, Salzwedel was a member of the Hanseatic League and by the time of the League’s demise in 1862, only Hamburg, Bremen, and Lübeck remained as the members. Today, these three cities are the only ones that retain the words “Hanseatic City” in their official German titles. After reunification in 1990, Salzwedel reclaimed its status as a Hanseatic city in historical recollection. 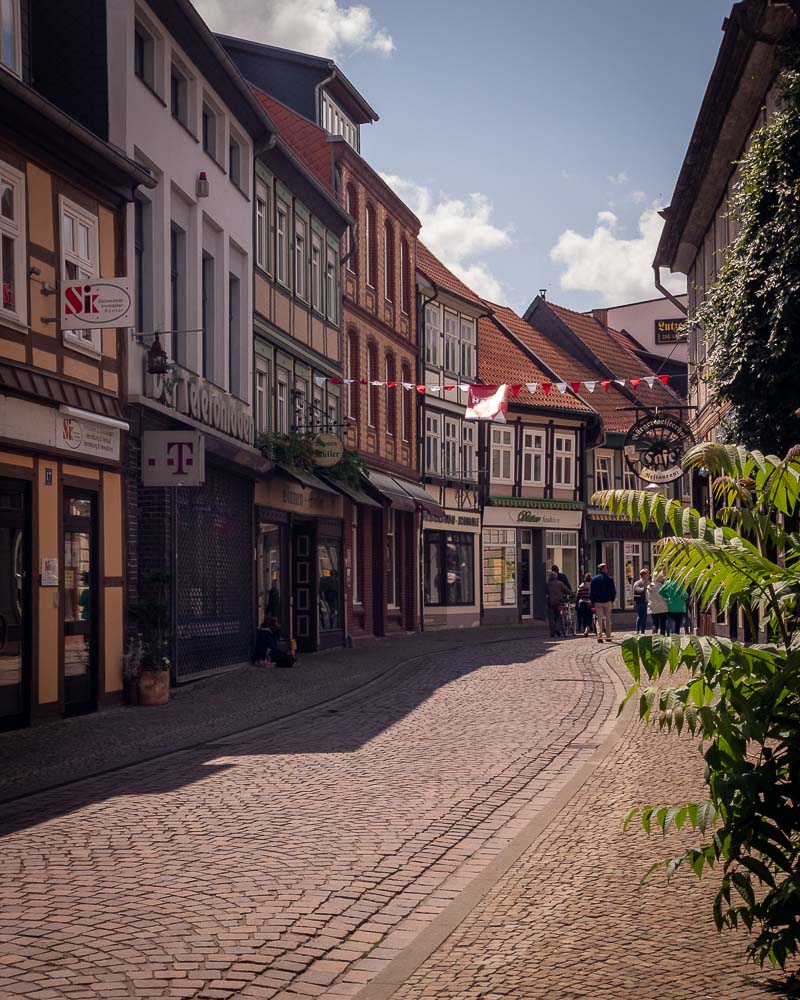 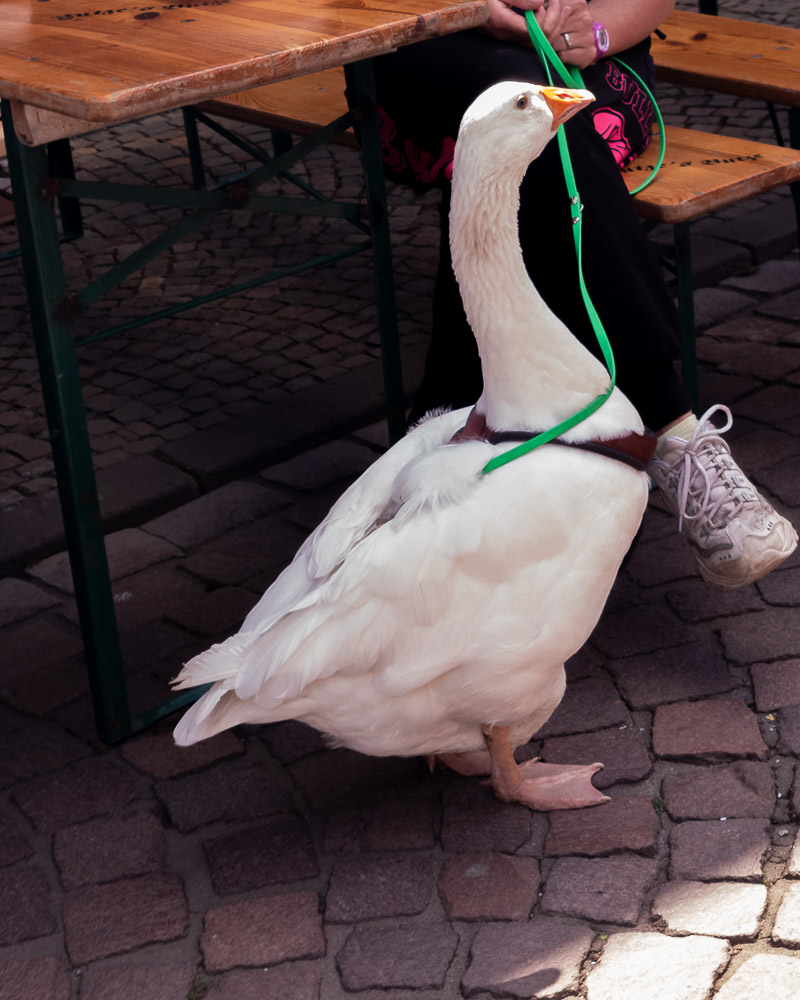 Who doesn't have a goose on a leash 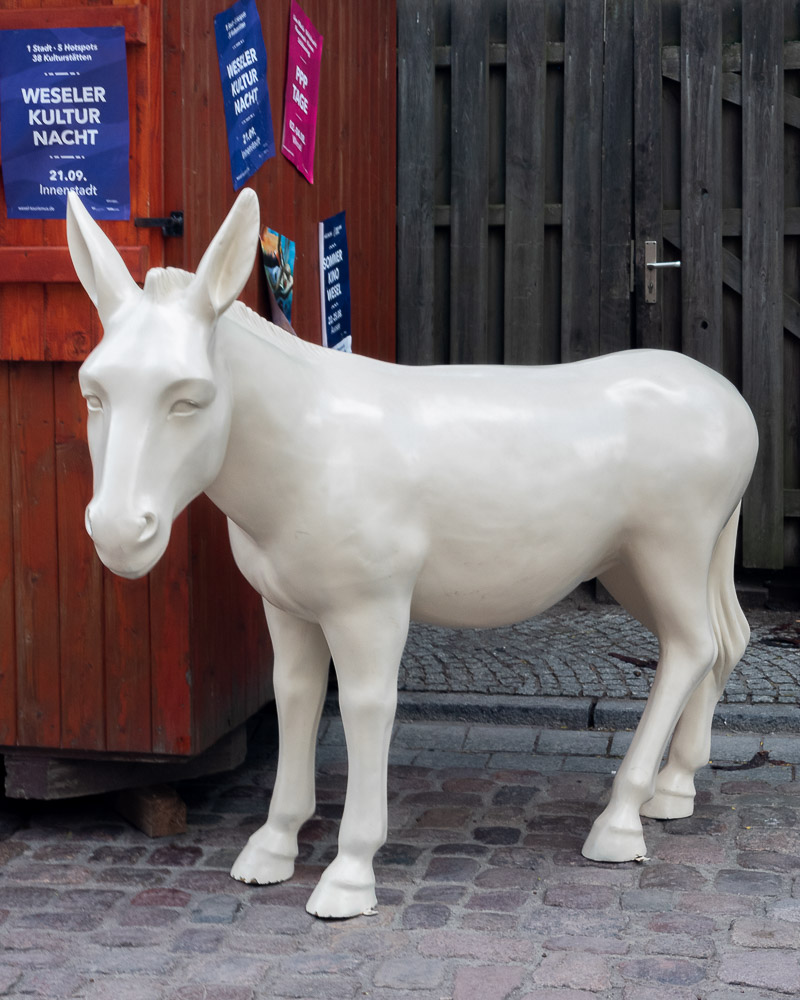 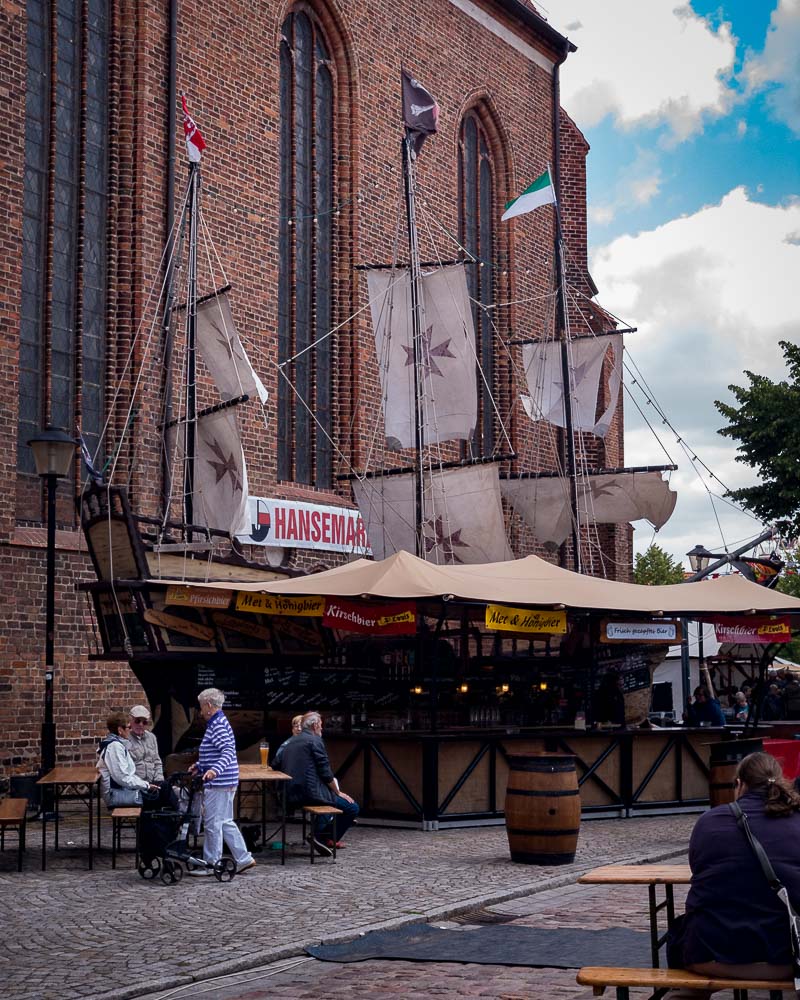 Not sure why there is an entire replica of a ship here... 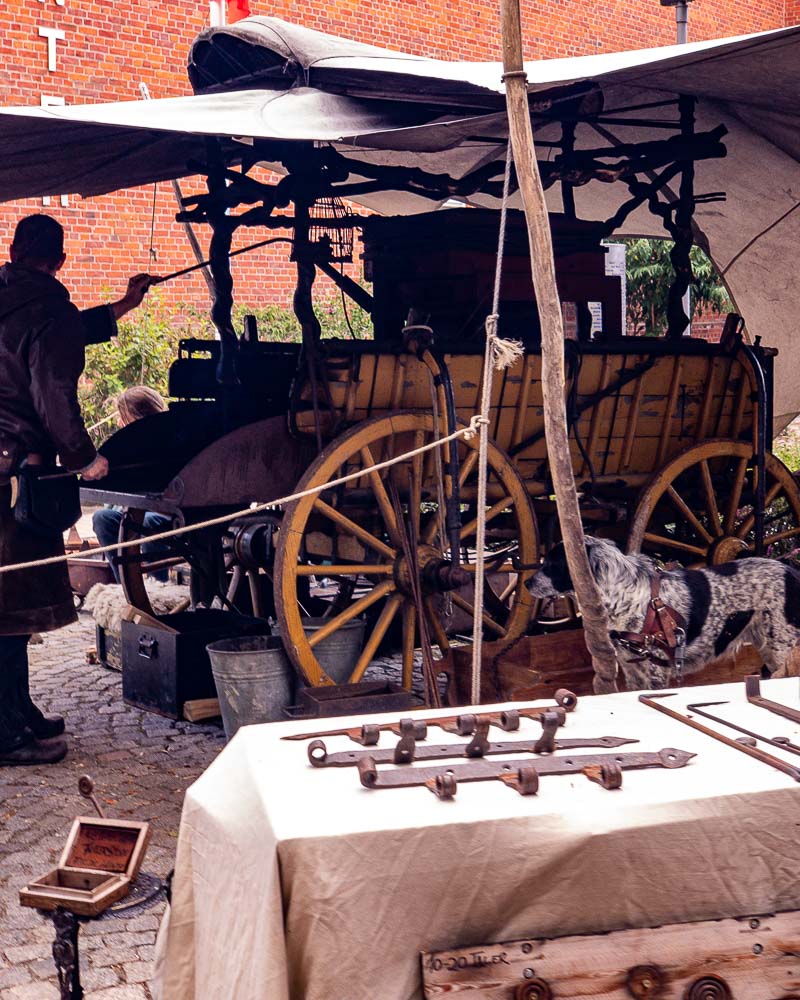 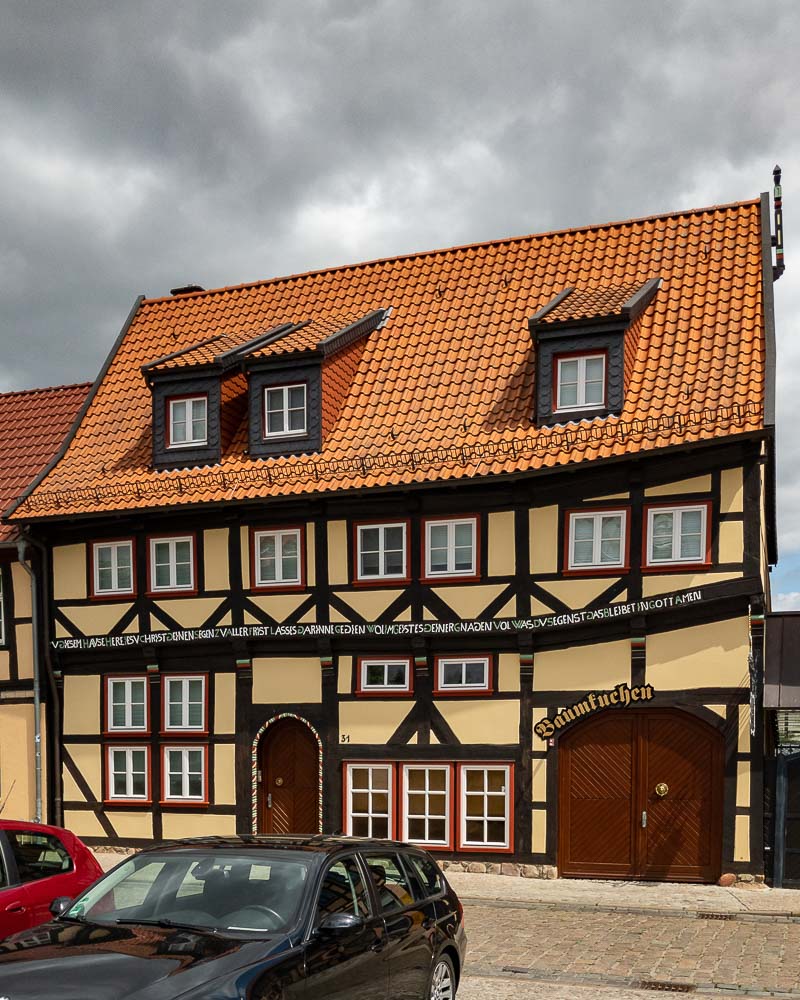 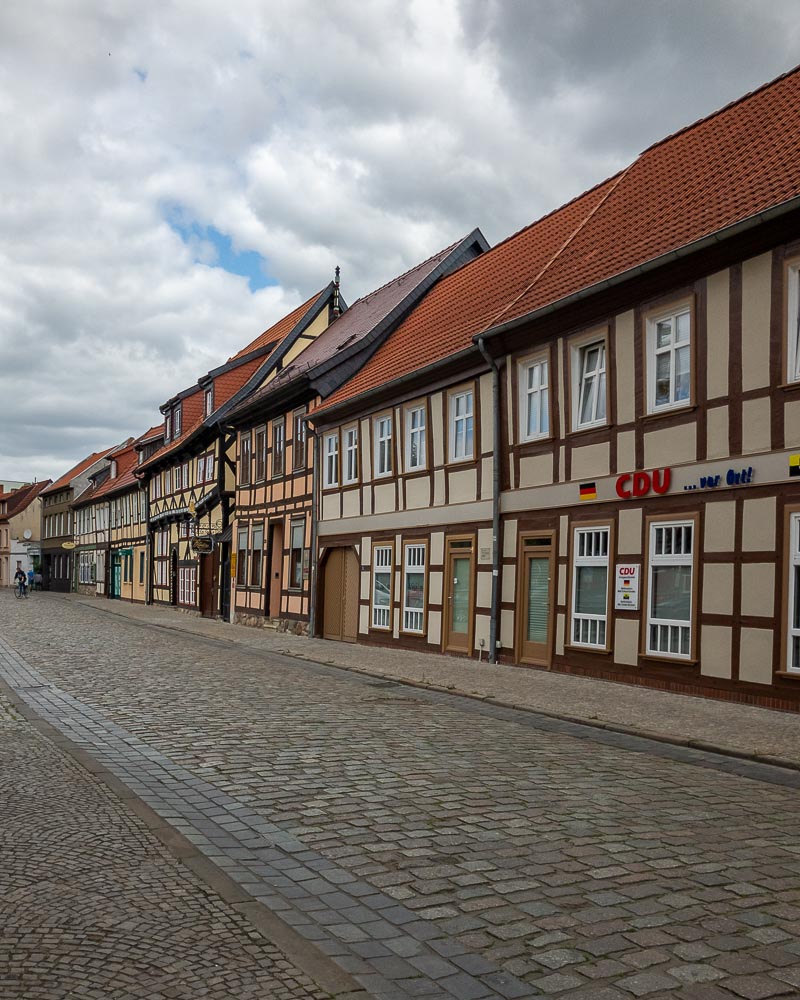 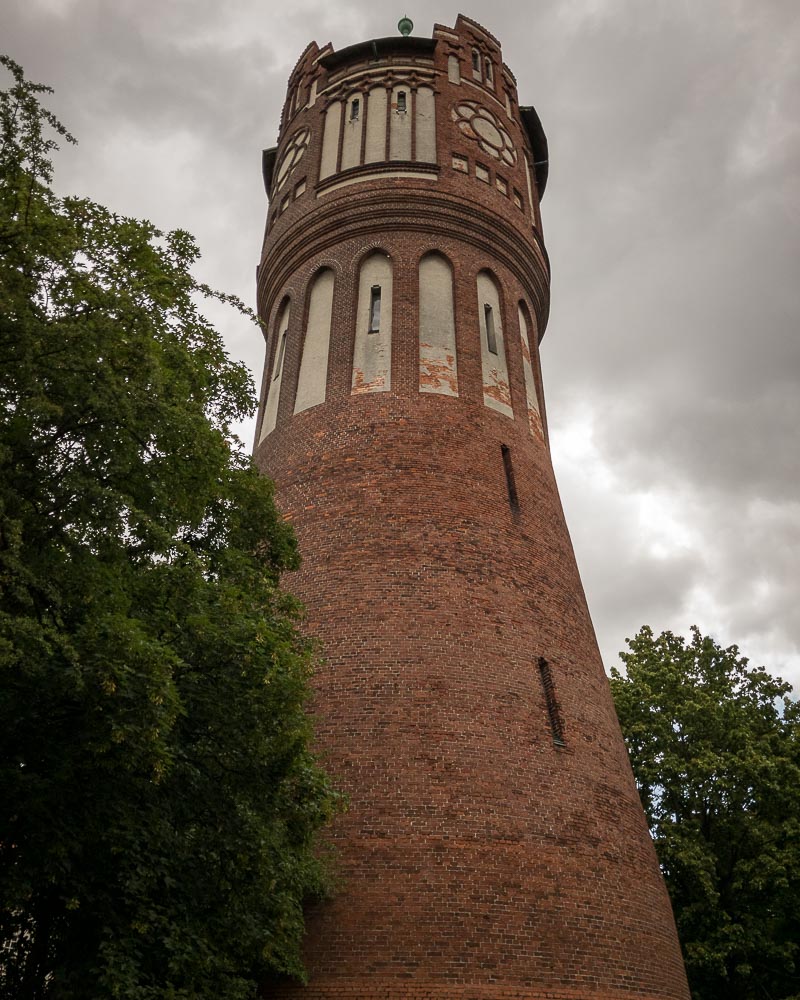 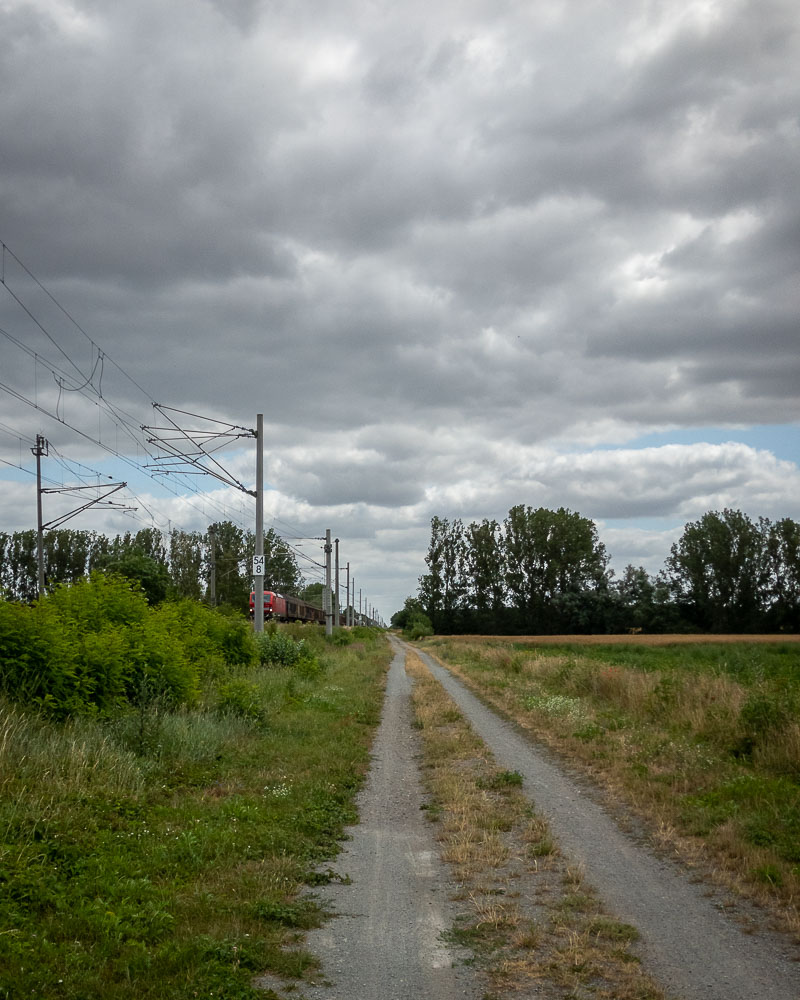 The way back along the train tracks 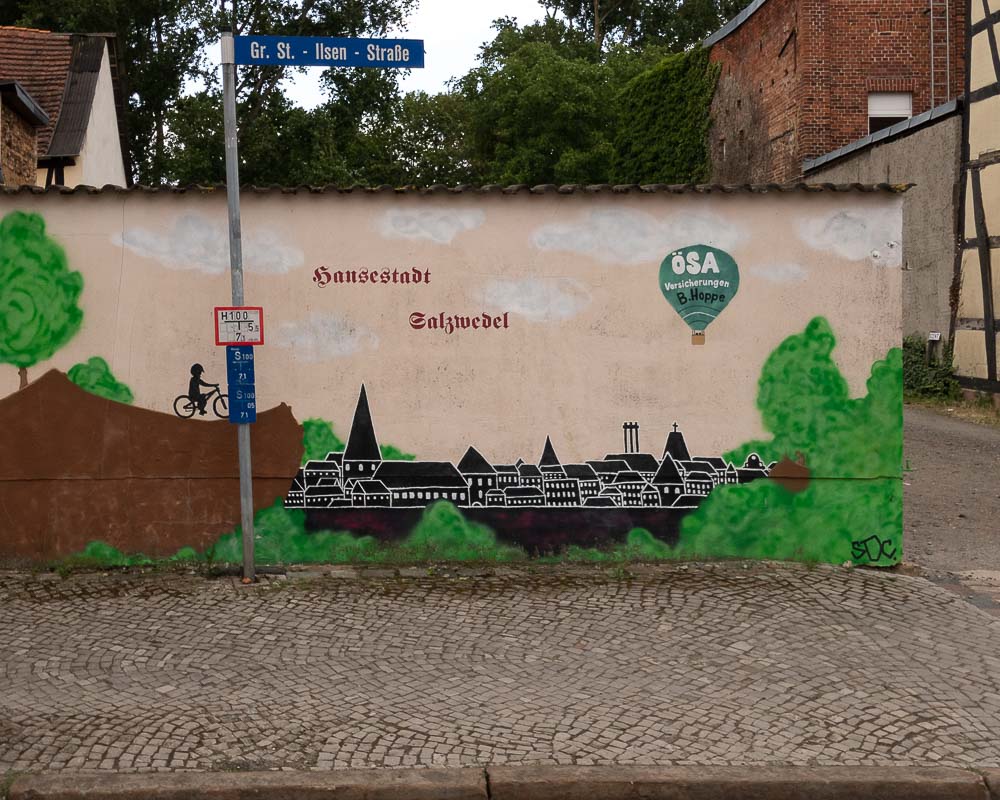