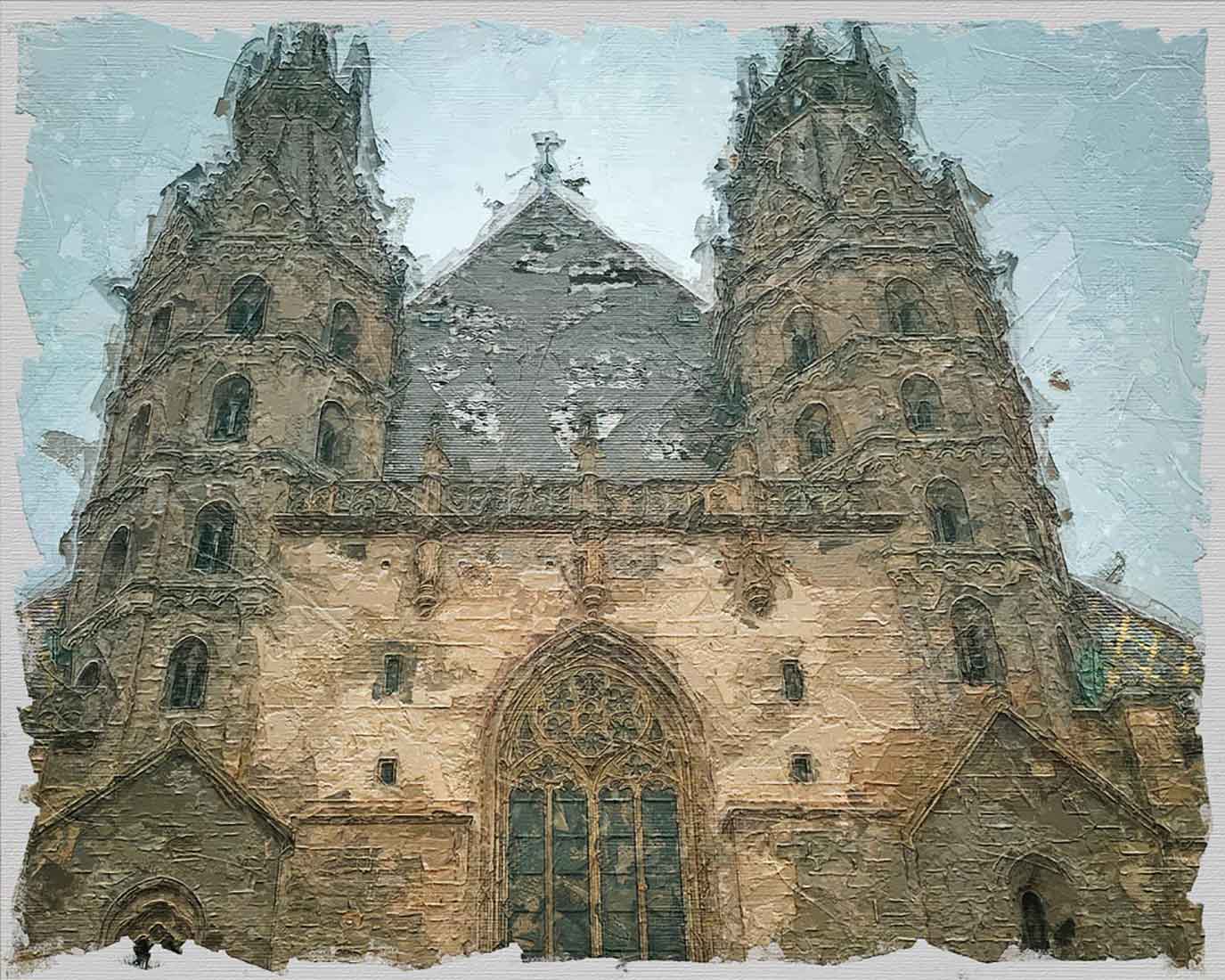 tephansdom (St. Stephen's Cathedral) is the seat of the Archbishop of Vienna. The current Romanesque and Gothic form of the cathedral stands on the ruins of two earlier churches - the first being a parish church consecrated in 1147. Built of limestone, the cathedral is 107 metres (351 ft) long, 40 metres (130 ft) wide, and 136 metres (446 ft) tall at its highest point. Over the centuries, soot and other forms of air pollution accumulating on the church have colored it black, but recent restoration projects have again returned some portions of the building to its original white. The cathedral, over the years, borne witness to many important events in Austrian history and, with its multi-colored tile roof, has become one of the city's most recognizable symbols. 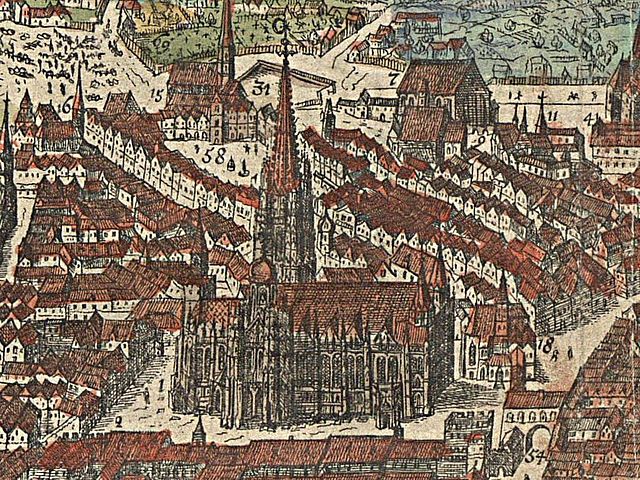 The church was oriented toward the sunrise on St Stephen’s feast day of December 26, as the position stood in the year that construction began. Built of limestone, the cathedral is 107 meters (351 ft) long, 40 meters (130 ft) wide, and 136 meters (446 ft) tall at its highest point. Over the centuries, soot and other forms of air pollution accumulating on the church have given it a black color, but recent restoration projects have again returned some portions of the building to its original white.

St. Stephen’s Cathedral’s massive south tower is its highest point and a dominant feature of the Vienna skyline. Its construction lasted 65 years, from 1368 to 1433. During the Siege of Vienna in 1529 and again during the Battle of Vienna in 1683, it served as the main observation and command post for the defense of the walled city, and it even contains an apartment for the watchmen who, until 1955, manned the tower at night and rang the bells if a fire was spotted in the city. At the tip of the tower stands the double-eagle imperial emblem.

The north tower was originally intended to mirror the south tower, but the design proved too ambitious, considering the era of Gothic cathedrals was nearing its end, and construction was halted in 1511. In 1578, the tower-stump was augmented with a Renaissance cap. The tower now stands at roughly half the height of the south tower. 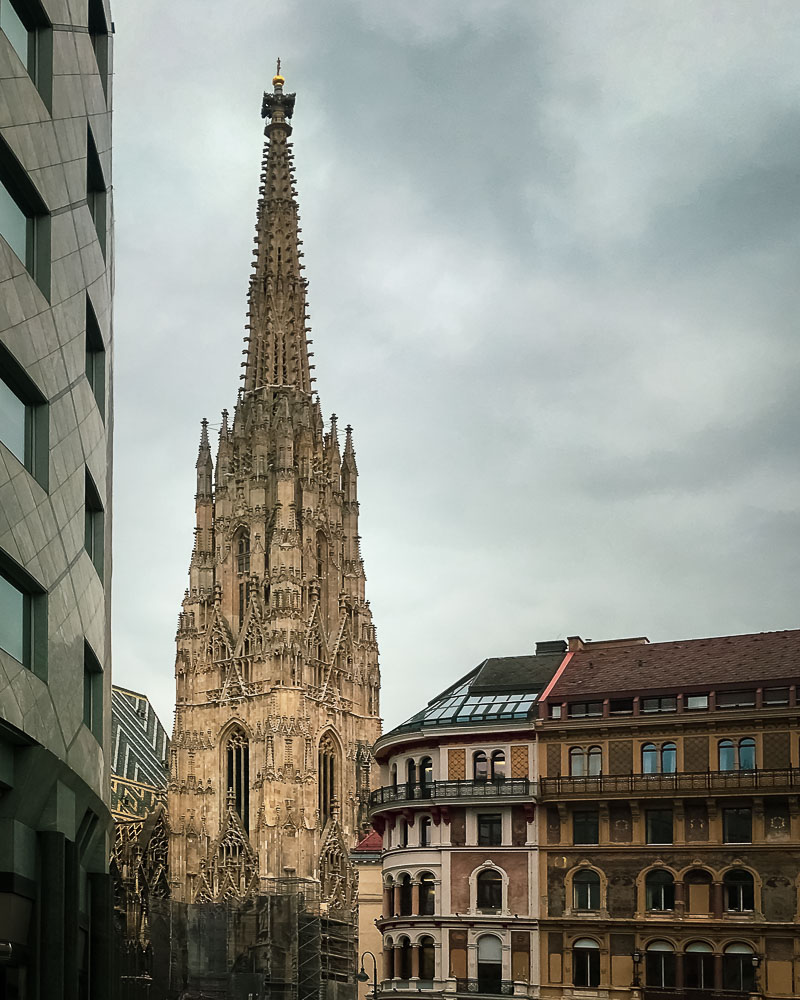 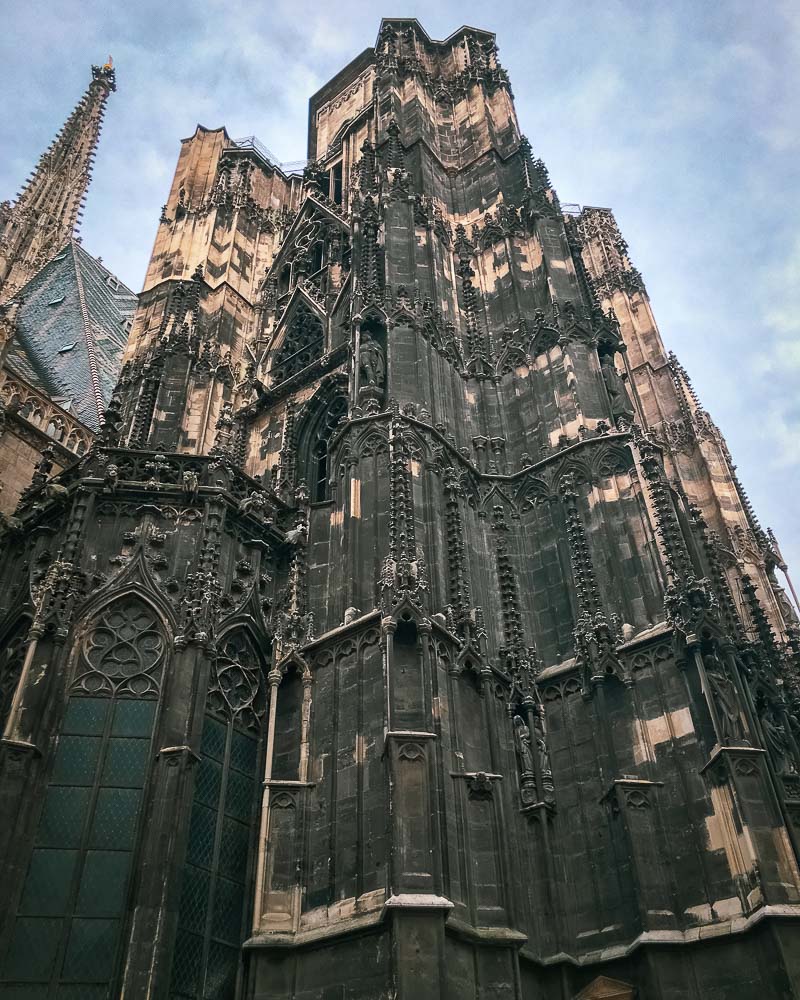 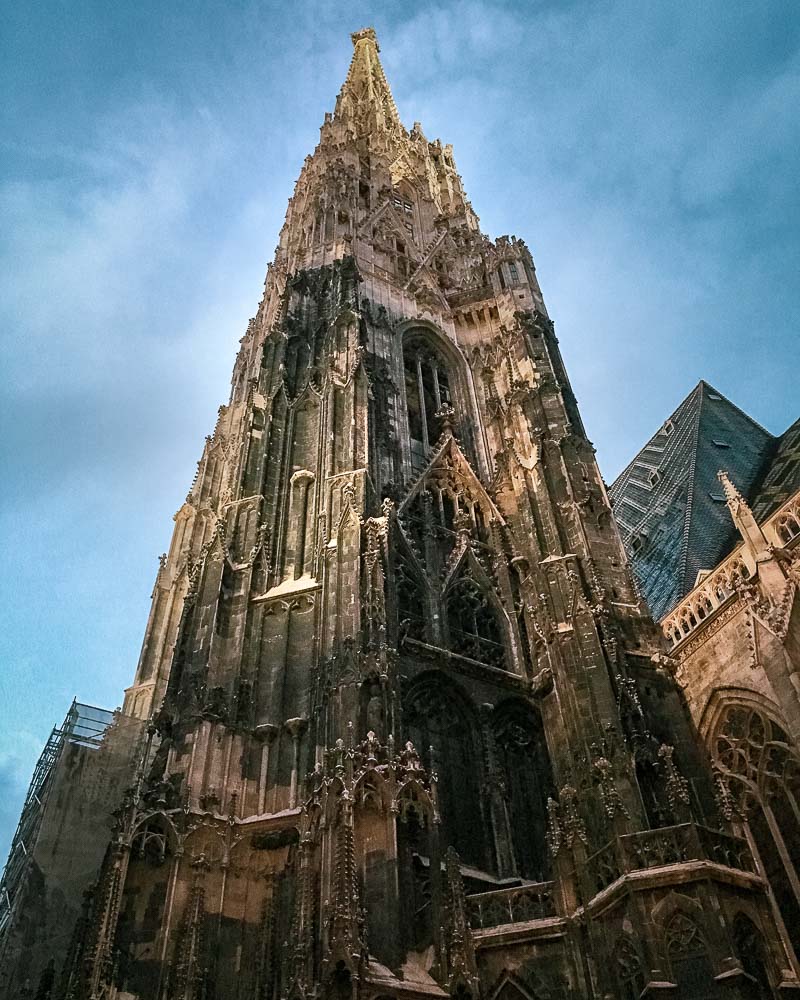 The main entrance to the church is named the Giant’s Door – or Riesentor – possibly referring to the thighbone of a mammoth that hung over it for decades after being unearthed in 1443 while digging the foundations for the north tower. However, it is possible – and less dramatic – that the name refers to the German name for the funnel shape of the door. Flanking the Giant’s Door are the two Roman Towers, or Heidentürme, that each stand at approximately 65 meters (213 ft) tall. The name for the towers derives from the fact that they were constructed from the rubble of old structures built by the Romans during their occupation of the area. Heiden means heathens or pagans in German. Square at the base and octagonal above the roofline, the Heidentürme originally housed bells but were lost during WWII. The Roman Towers and the Giant’s Door are the oldest parts of the church.

The glory of St. Stephen’s Cathedral is its ornately patterned, richly colored roof covered by 230,000 glazed tiles. Above the choir on the south side of the building the tiles form a mosaic of the double-headed eagle; symbolic of the empire ruled Vienna. During World War II, the cathedral was saved from intentional destruction at the hands of retreating German forces when orders to “fire a hundred shells and reduce it to rubble” were disregarded. However, in 1945, civilian looters lit fires in nearby shops as Soviet Army troops entered the city and winds carried the fire to the cathedral, where it severely damaged the roof, causing it to collapse. Reconstruction began immediately after the war and was completely reopened in 1962. 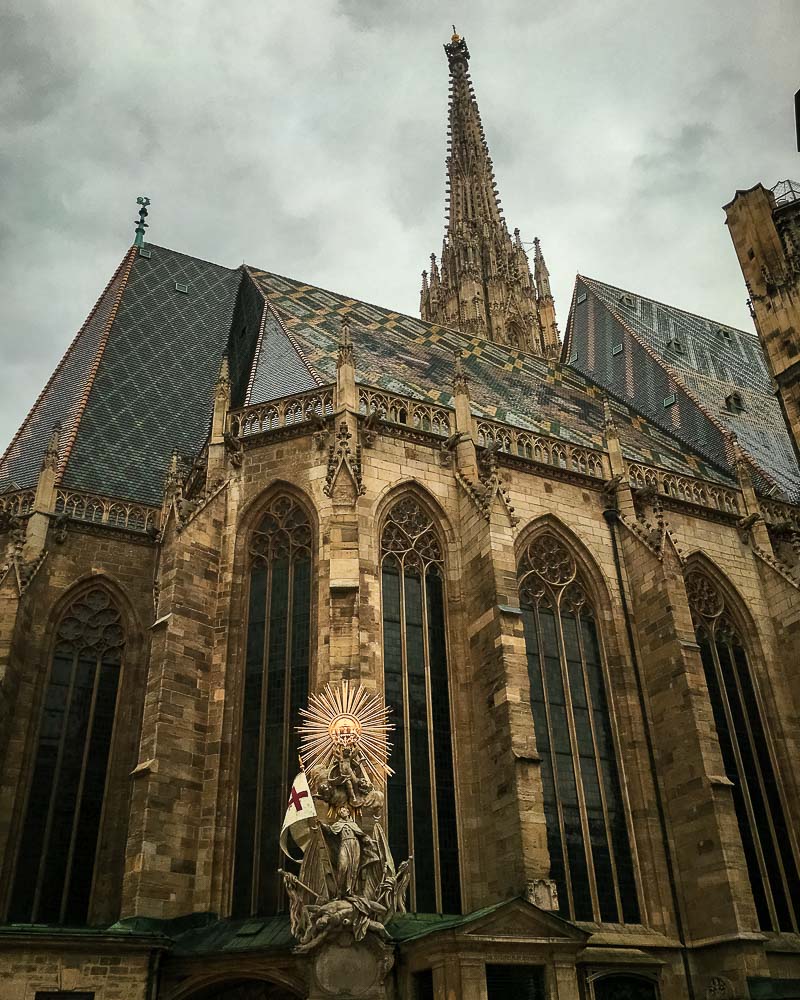 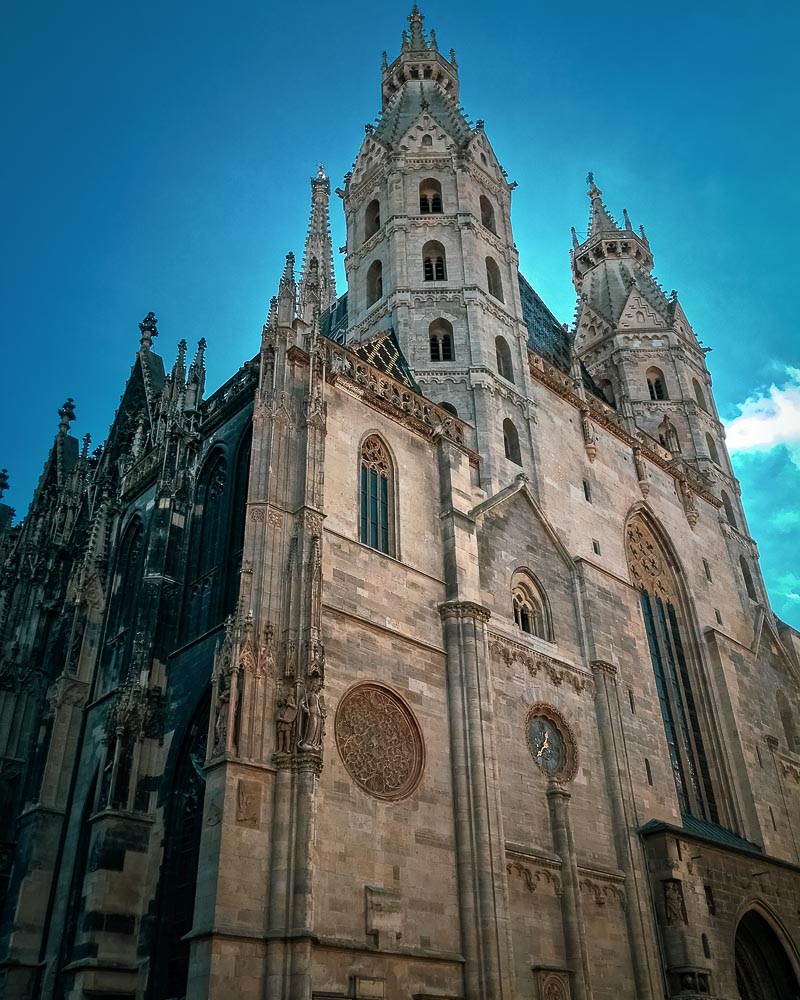 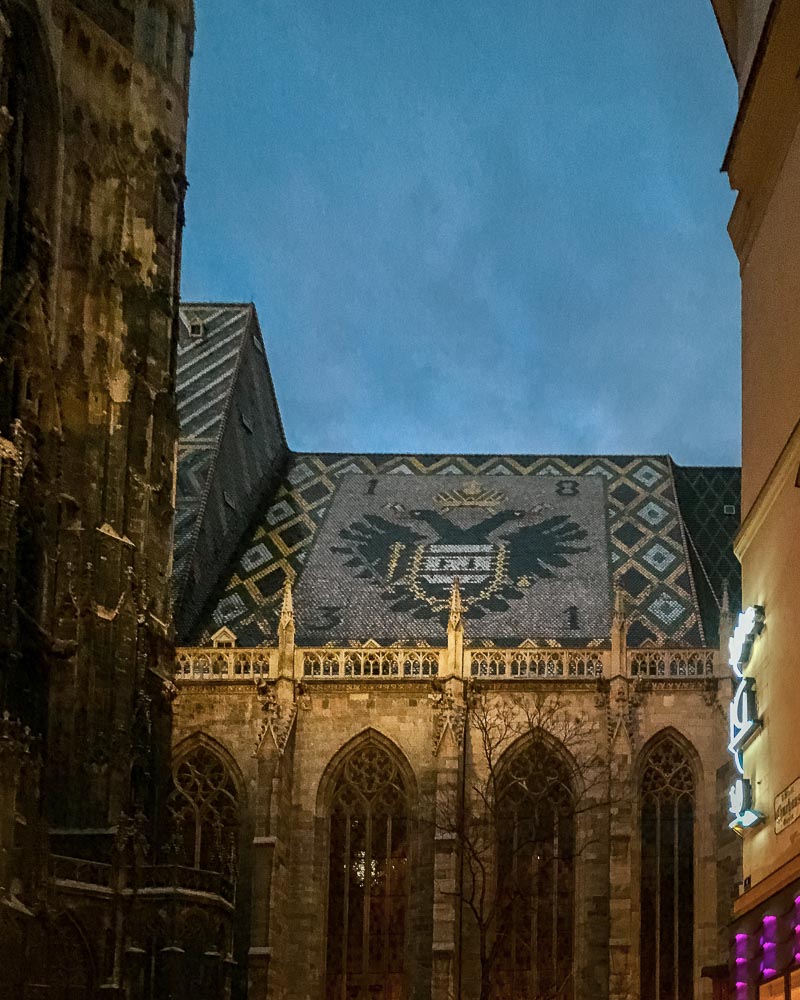 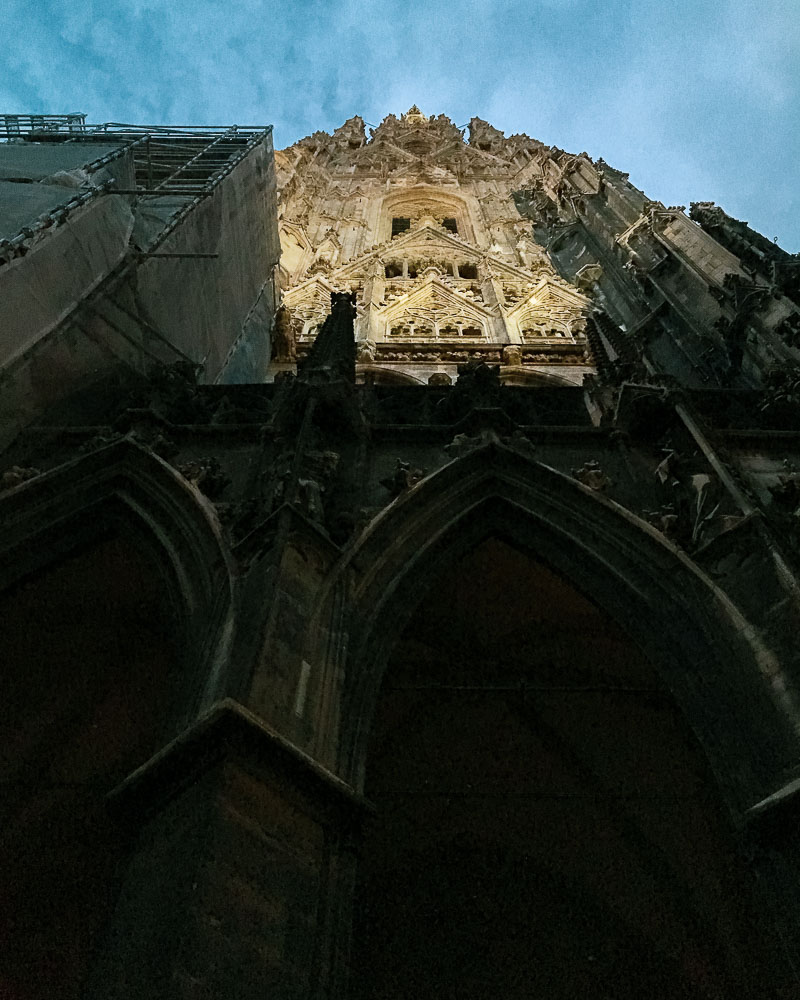 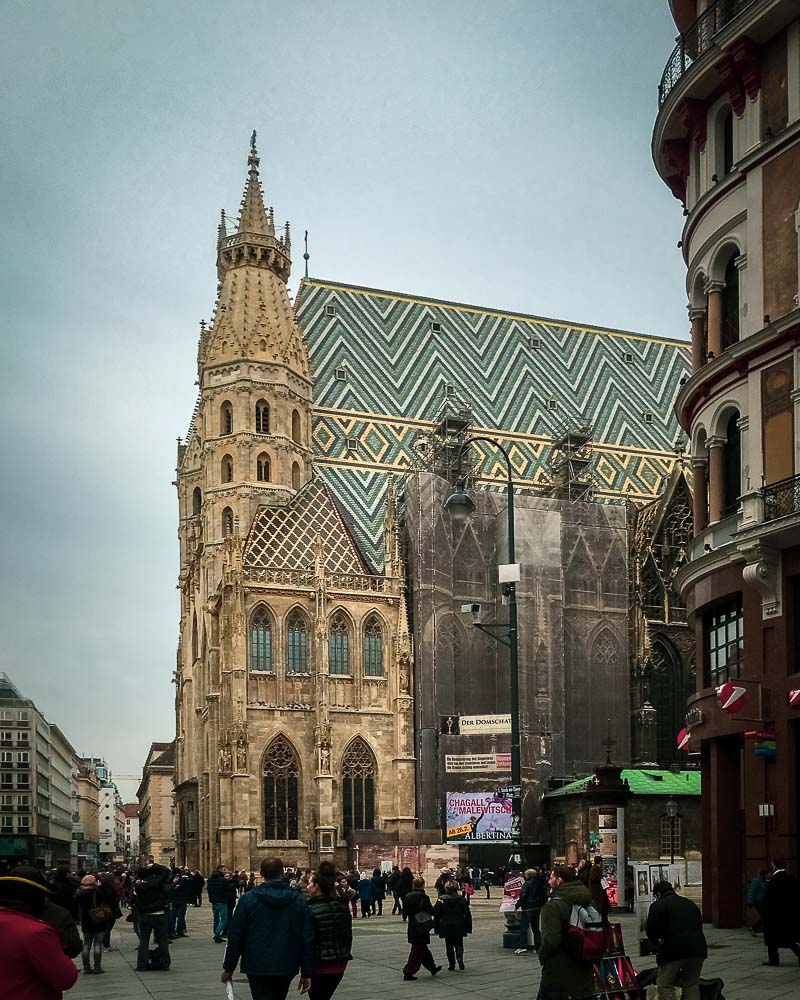 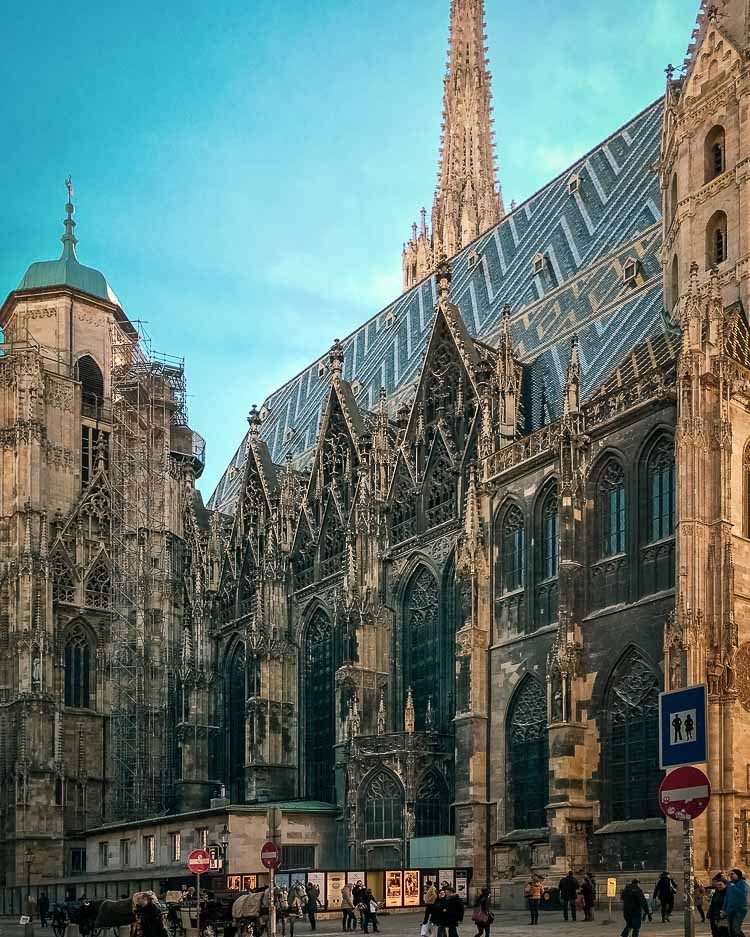 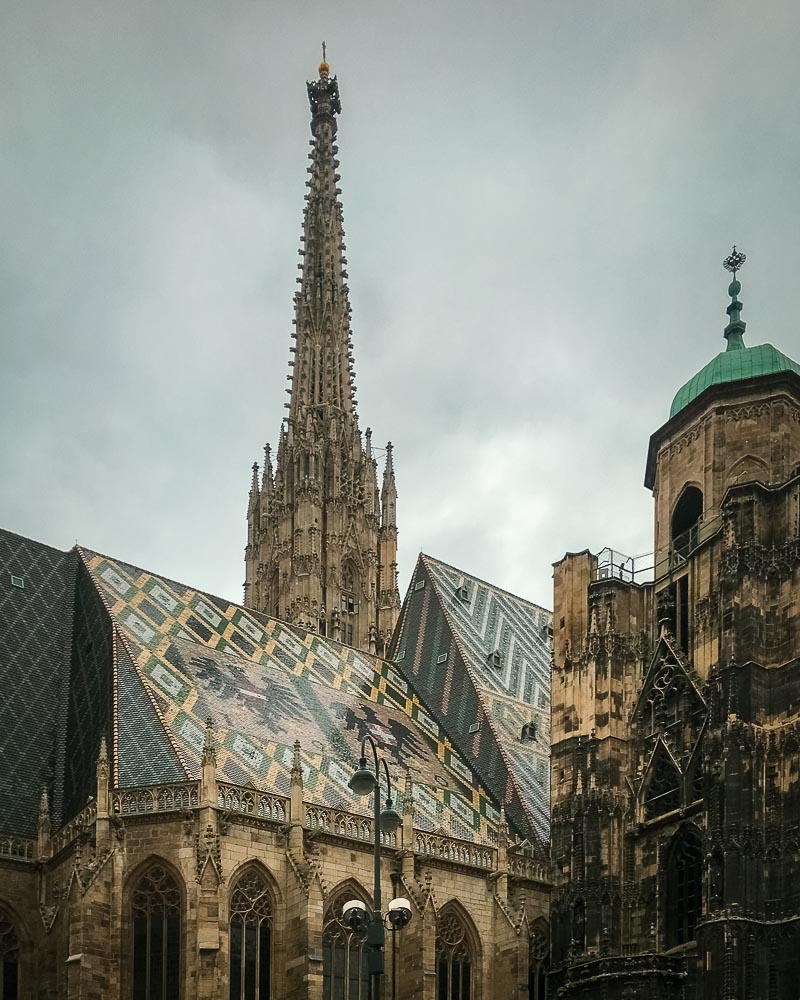 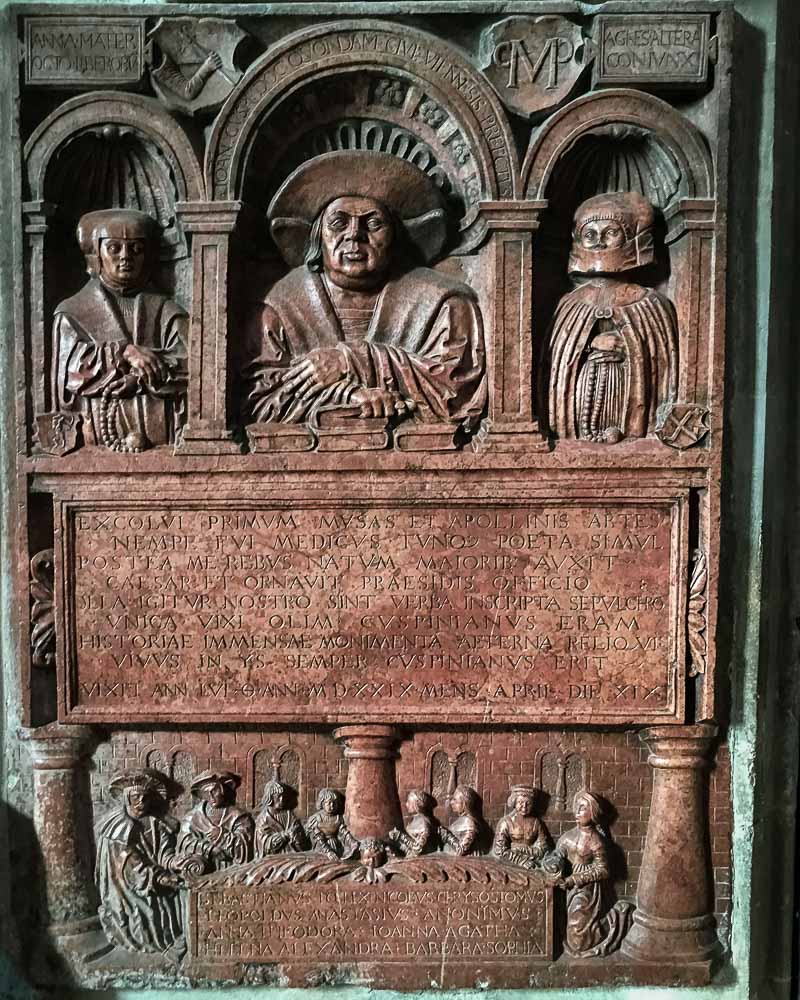 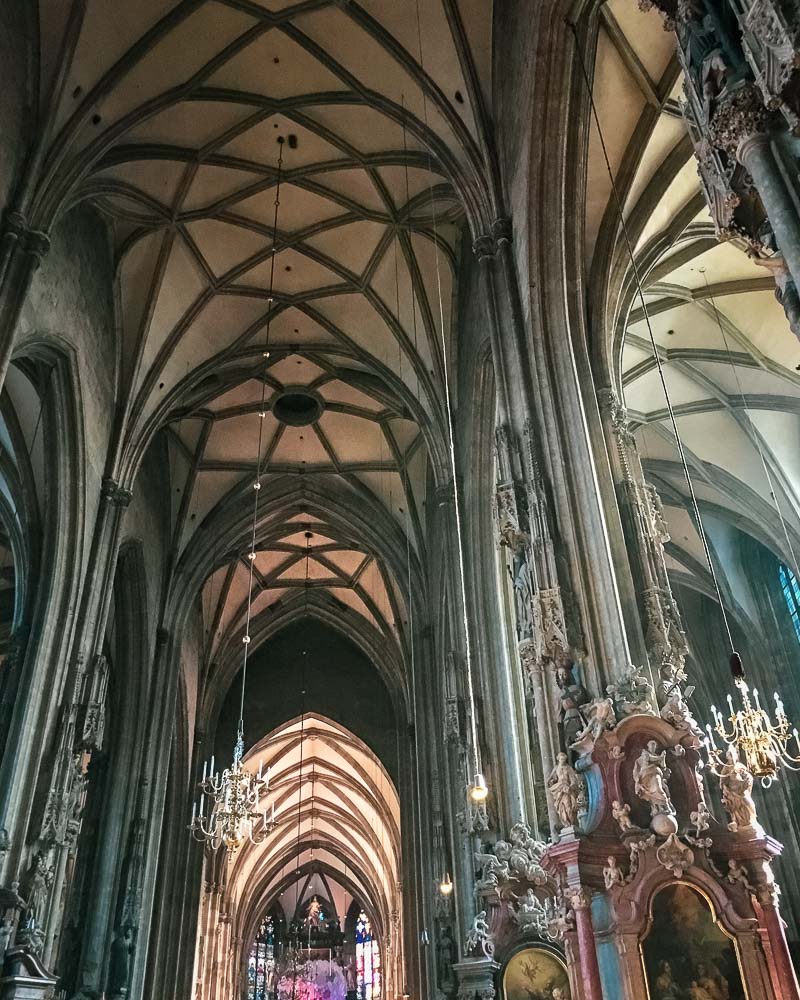 The cathedral is every bit as grand others I have seen and the grandeur of the surrounding buildings add to the experience. I would like to climb the church tower – I love to get a bird’s-eye view in these cities – but I think that this would not be Olaf’s cup of tea. We do stroll about the interior although much of the cathedral is closed off and there are many people about. 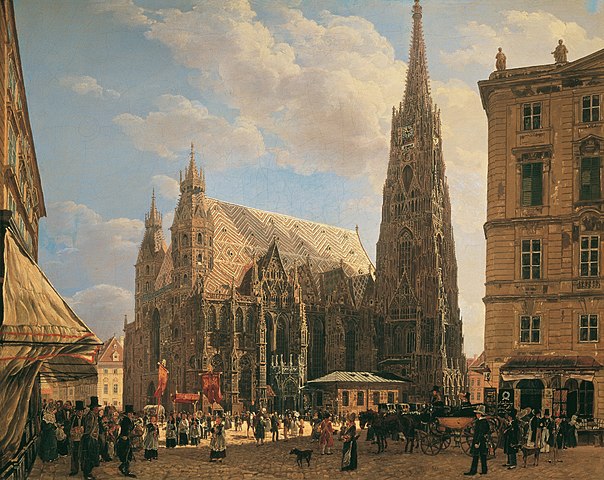