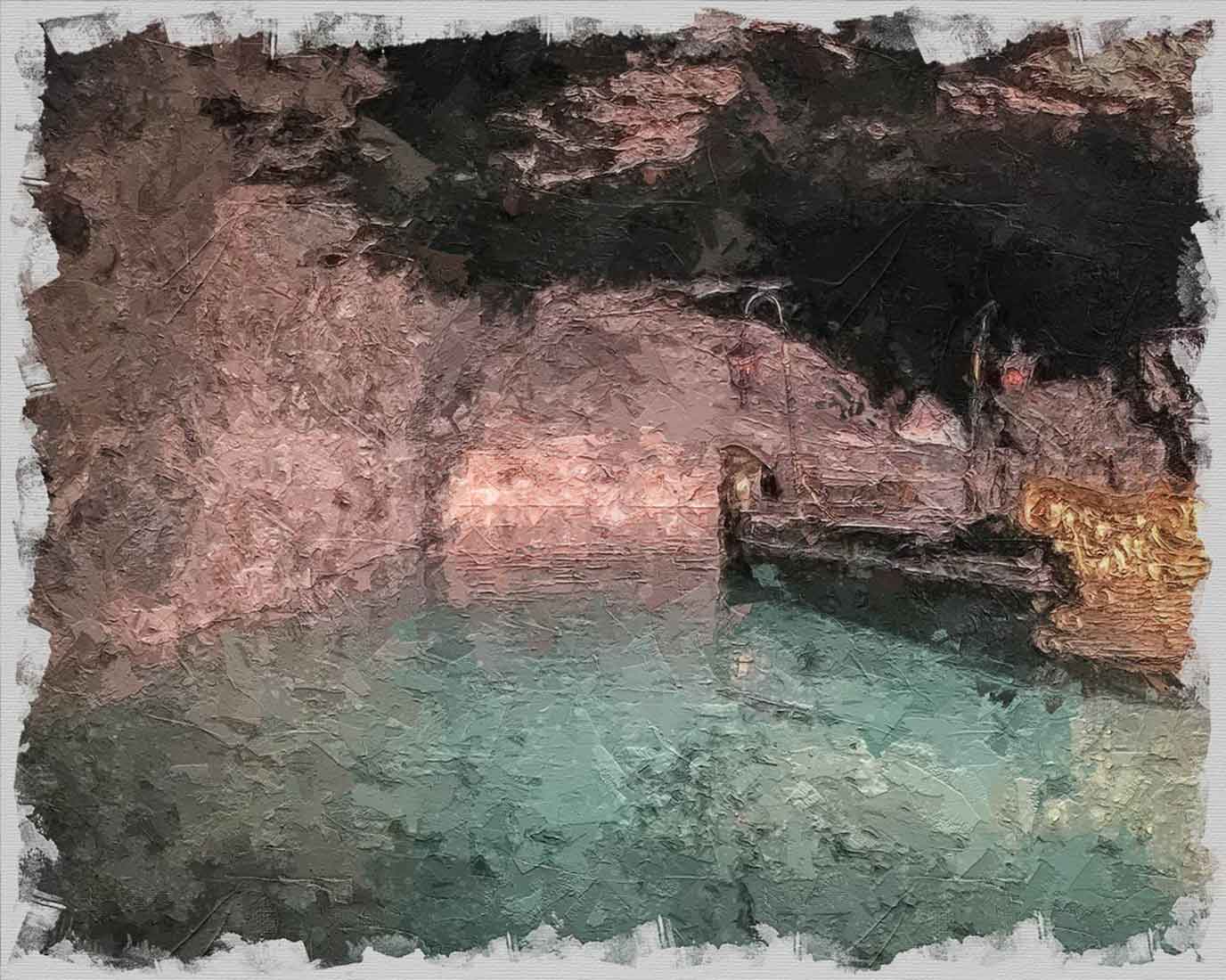 ur next stop is the Seegrotte in Hinterbrühl. The Seegrotte is an underground cave system with a large grotto located under a former gypsum mine. In 1912 an underground explosion in the gypsum mine caused 20 million liters (5.3 million gallons) of water to flood the mine. The lake is 60 meters below ground and is the largest subterranean lake in Europe and is a steady 9 °C all year round. For many years the mine stood still.

In 1918, a Viennese liquor manufacturer, bought the abandoned mine with the idea to an amusement establishment. Later, he tried his hand at mushroom cultivation, which, unfortunately, failed because the temperature was too low. In 1920, he had the 200-meter-long winding gallery – still largely lined with wood from the mining times – vaulted with bricks. In the early 1930s, the mine waa wired for electricity and, with an old military pontoon and an electric boat, the mine opened for tours in 1932.

During World War II this area was requisitioned by the German military because of the protection that the subterranean site offered. The original plan was to store edible fats in the tunnels, but this failed because of the high humidity. Large quantities of technical fats were stored in barrels. Cultural goods were also stored to protect them from war damage. During this time, the mine continued to operate as an exhibition mine. It was not until 1944 that the tunnels were fully confiscated and an aircraft factory was set up in them under the code name Languste. It was in this site that one of the first jet fighters in the world was produced (one of the Luftwaffe’s secret weapons).

At the end of the war only a few of the bombs previously laid by the SS were detonated during the escape because of the intervention of an Austrian sergeant. Despite this, however, there was still a great deal of damage to the mine. In 1945, the arduous process of clearing out all the equipment, machinery, and aircraft parts began. however, the sea grotto was confiscated by the Soviet occupation forces at the start of 1946. It was not until half a year later that permission was obtained to re-establish the grotto as an exhibition mine.

So, I am not sure what I am thinking – or not thinking – since this is an underground lake and I am very claustrophobic. As we were ushered into the EXTREMELY small tunnel and started to make our way down I almost panicked and backed out…only the quick forward pace kept me going. The tunnel was long, and dark, and well, small. The worst part – the ceiling was only a scant inch or so above my head. Eventually, I am expelled into a large tunnel and I feel the suffocation of claustrophobia fade.

I pass several dioramas that show the work and life that has occurred underground. One shows some original airplane parts and a model of the one-time factory. Another shows some of the old tools of the original gypsum miners. Horses on a göpel drove the hoisting machine for the hoists filled with gypsum. They had their own stable underground, lived in the mine for up to 20 years and would eventually go blind from lack of light.

After descending the last final stairway, we reach the underground lake. The water is crystal clear allowing clear view of the grotto bottom. Lack or air movement means the water surface reflects the rock walls and ceiling like a mirror. We all climb aboard a small boat and slowly motor our way through the caves – the colored lights shining on the walls making for a beautiful sight. After a short tour of the underground lake, we are making our way back up to the surface. Of course, that means that I have to travel back through the tiny tunnel again. Ugh